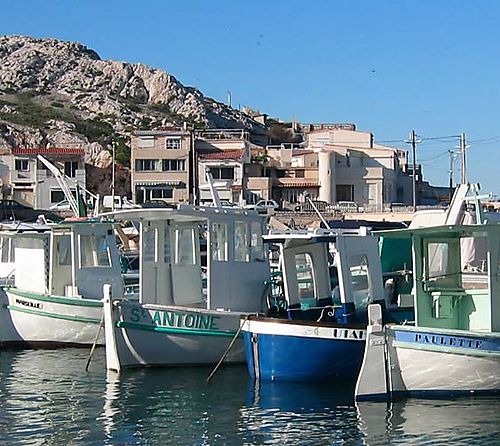 Marseilles is the setting for today's story. (Photo taken in the fishing village of Callelongue).

Who hasn't had the fantasy of leaving his or her old life behind to start over? What would happen if you gave up your job, city, state, and routine to move to another part of the world? Critically acclaimed writer and aspiring painter James Morgan does just that. Risking everything, he and his wife shed their old, settled life in a lovingly restored house in Little Rock, Arkansas, to travel in the footsteps of Morgan's hero, the painter Henri Matisse, and to find inspiration in Matisse's fierce struggle to live the life he knew he had to live. Part memoir, part travelogue, and part biography of Matisse, Chasing Matisse proves that you don't have to be wealthy to live the life you want; you just have to want it enough. Order "Chasing Matisse", here:

gober (go-bay) verb
: to swallow, to scarf, to gulp down

Also:
se gober: to think a lot of oneself, to fancy oneself
un gobeur, une gobeuse = one who is gullible

And... ever heard of the word "gobe-mouche"? It means, literally, "fly-gobbler" and it is another word for someone who believes everything he hears. Can't you just picture those flies heading, one by one, into the mouth of the astonished (jaws dropped) listener of fantastic stories?

Hallelujah and Dieu merci* that I don't have to translate for a living. After re-writing my brother-in-law's story (originally penned in French), and sweating over certain words, I can certainly sympathize with any interpreters who have ever hiccupped before an unfriendly English equivalent....

The "Gober"* story held a wee dilemma or deux* in the translation department... c'est-à-dire*: what might sound all right in French, can sound altogether awkward in English. For this reason, I admit to having experienced a bout of creative amnesia (particularly near the last paragraph) while transcribing today's story. The convoluted truth is: I "forgot" the English equivalents to all of the doubtful words... and that is how they got dumped.

That said, you can see most of the story here now (in English)... or read the entire story (in French) here.

Back in the beginning of the eighties, already 28 years ago, the southern quarters of Marseilles stretched out into the magnificent neighborhoods of "Mazargues", "Bonneveine", "La Vieille Chapelle", and "La Pointe Rouge"... not to mention "Le Parc du Roy d'Espagne" located near the hills of "Marseilleveyre" beyond which the famous calanques* of Sormiou, Morgiou, and Sugiton bring great joy to the Marseillais.

The neighborhoods, back then, were not yet exploited by those rich, unscrupulous property developers. Over time, though, the builders eventually bought up the great family farms where "natural" vegetables and fruits grew, and where chickens laid their eggs each day, eggs that delighted me twice each week.

My mother, between two piqûres* (she was a district nurse who made house calls) would stop by one of these farms to buy lettuce, carrots, tomatoes, artichokes... and seasonal fruit: strawberries, cherries, peaches, apricots... but what I looked forward to the most, each time she went to the farms, were those fresh eggs--laid that very day. In fact, when I was little, my greatest delight was to "gober un oeuf"!*

That might seem strange, but I did this with the help of a sewing needle, punching a little hole at each end of the egg, then sucking down the precious contents. It is really a very good treat and, what's more, it's all year long--as chickens don't have seasons!

These days, unfortunately, not one of the farms that my mother visited can be found... as apartment buildings have "grown" in the place of vegetables and fruit trees. Once in a while, though, I still have the chance to "gober un oeuf". Fortunately, in the arrière-pays* of Marseilles, one can still find a few of these fermes,* the owners of which knew how to resist the land developers who do not know the pleasure of eating a farm fresh egg. 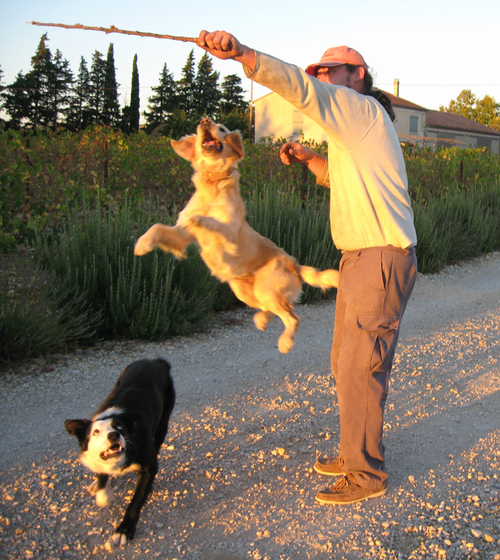 My beau-frère, our dog Braise (leaping) and pal. What's that? You want to see a close-up of my brother-in-law? Click here. And for a recent photo, skip to the end of this post.

Psst! Pressed? Haven't got time to say the whole word? Why not try the user-friendly "beauf" (bowf), a popular shortened version. No need to roll a French "r" with that one!

:: Featured book :: "Different Like Coco" The rags-to-riches story of Coco Chanel plays out in a wonderful picture-book biography as full of style and spirit as its heroine.
.

I call him "Uncle Jacques" even though he is a few years younger than I. Besides brother-in-law, my children's uncle is many things to me. He is our family's cat consultant, for one. (It was Uncle Jacques who rushed out to buy steamed BABY food ("printanière de légumes,"* no less) when our new kitten came down with feline coryza.* Croquettes* are too hard to digest, he cautioned, before sending Coco and me off to the vétérinaire.*

Beside Cat's Best Friend, he is our children's favorite jester as well as my mom's adopted son (after Jean-Marc). And did I mention he is was single (Jacques, that is!)?

Bon,* I won't go on (lest you call me Cupidon*). I leave you with Uncle Jacques' foolproof recipe for gâteau au yaourt.* (update: remind me to post this recipe at the next chance!)

French language learning books:
Simple enough for a beginner but challenging enough for a more advanced student, French Demystified is your shortcut to mastering this engaging language. 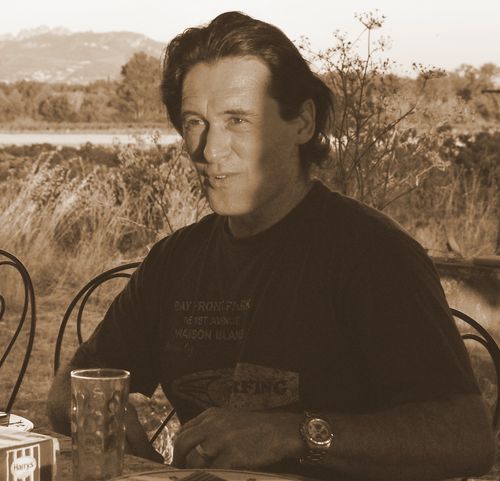