How to say tenant in French? 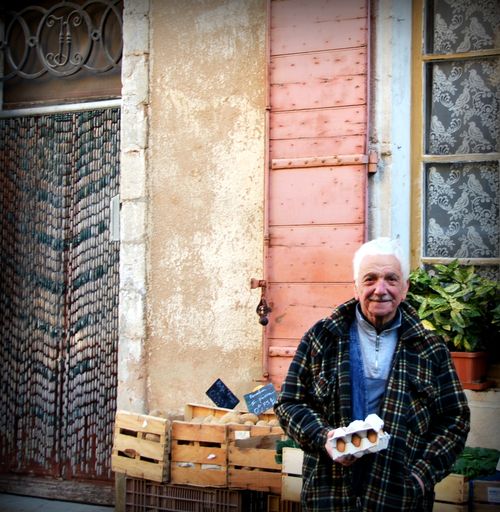 Wish I'd gotten a picture of the hero in today's story. Meantime, here's a lovable stand-in. Photo taken somewhere in the Vaucluse...

I went twice to La Ciotat yesterday. First, in the morning--to get more ingredients for the Healthy Fudge--and again in the evening to look at an apartment for my belle-mère.

The second trip was Jean-Marc's idea. "But are you sure your Mom wants to leave Marseilles? All of her friends are there. And all of her friendly commercants, too." I remember meeting Michèle-France's pharmacist on my previous visit, and witnessing the cheerful bantering between the two women. In a new town, my belle-mère would lose these cozy ties--or have to slowly build them again.

Jean-Marc assured me that his maman was desperate to move. After nearly two decades in her shoe-size apartment, Michèle-France feels like a bull in a birdcage. And because there is no elevator, she is obliged to climb four flights of stairs--the idea of which keeps her prisoner inside her own home (and one or two nagging health issues do nothing to encourage her to venture out).

***
In a flowering courtyard a hundred meters from the sea, a thin man is looking out from a ground floor apartment. The smile on his face is as warm as the sunshine pouring down on the flowering lauriers-roses beneath his window.

"That's Monsieur C. He's moving back to Corsica," the landlady explains, guiding Jean-Marc and me up the stairs to lobby.

In the entry hall, beside the door of the apartment, there is a giant poster in hues of blue--my mother-in-law's favorite color. The details of the affiche escape me when the porte flies open and another subject comes into view: the Corsican.

"Bonjour, Mr. C." The landlady apologizes for the invasion but we are apparently no bother: her tenant ushers us in with a warm welcome. "Entrez," he says, "entrez!"

We begin our walk-through of the one-bedroom apartment. Passing a hall closet, the landlady assures her locataire: "No need to open it, Mr. C."

"Je vous en prie!" Mr. C. insists, reaching down to push a heavy packing bag out of the way.

I peer into the tiny placard, which holds a few threadbare items. My focus returns to our voluntary guide, Mr. C., whose clothes mimic those in his faded wardrobe. He is wearing an oversized coat and pants and his fedora is about to topple off his head. Standing this closely to Monsieur, I smell fumes on his breath and notice how his eyes are softly lit.... I begin to wonder why he is moving and hope that wherever he goes he will be OK.

"And here is the bedroom," the propriétaire points out. "The place comes furnished."

As we step past him, Mr. C. smiles, pushing his packing bag out of the way once again. I reach out and grasp his shoulder in an automatic gesture of thanks. Thanks for the warm welcome. Thanks for being so helpful. Thanks for putting up with this invasion. Only, when I find myself patting his shoulder again and again, I realize my reflex may be overly sympathetic. I begin to wonder: if Monsieur didn't have the glassy eyes and octane breath--if he didn't have the repurposed suitcase--if instead he had a Louis Vuitton and wore a bow tie--then would I have patted him on the shoulder?

No, I wouldn't have! I would have been too intimidated. But here, there was no intimidation or awkwardness--only a sense of camaraderie. Still, I should be more composed--for overt displays of sympathy can come across as pitying, or worse--condescending!

As we continue to tour the stranger's apartment, I think about how quick I am to show affection to certain types of people. How chatty I can be! But put me in a room with the up and climbing Joneses, the cosmopolitans--or people my own age, or savants--and I'm suddenly tongue-tied and awkward. No way I'd be slapping them on the back, ol' pal style. Ça ne se fait pas!

As my mind overthinks my gestures, Mr. C. is going with the flow--the tide of strangers peering into the nooks and crannies of his upturned life. I notice the padlock on his bedroom window shutters; once again I have the urge to reach out... and comfort him? and for what? But the padlock, or cadenas, is proof of the fragility that up til know could only be sensed.

"That's the WC," the landlady says as we follow her out into the hall again. "It's separate from the bathroom." Opening the door I'm cheered by the tiny room with its bright turquoise blue paint. There is a picture of a saint on the wall, her arms are outstretched just as Mr. C's were, on ushering us into his home earlier.

As I stand admiring the saint a sour scent lifts upwards from beneath my feet, filling my nose with an acidic tingling.... I quickly back out of the WC. but the scent seems to trail out to the hallway. I guess Mr. C. had missed the spot--as men will--only his aim was a little farther off than most.

Overall, Jean-Marc and I loved the apartment, and Mr. C's character lent an affectionate and adorable aura to the place.

The deal was sealed with a bottle of wine - one Jean-Marc promised to bring on the next visit. With a little persuading, maybe we can get him to bring a bottle for Mr. C. (or would fudge be a better idea?), in thanks for his warm hospitality.

On our way out I brushed Mr. C's shoulder once again, finding it hard to resist the lovable character. The gesture wasn't condescending, no! How good it felt to touch a saint and to sense his gentle spirit run through me, filling my mother-in-law's next home with love and abundance.

Post note: The landlord tells us Mr. C. is returning to his native Corsica, after a stint in La Ciotat. No sad ending, here. May the beauty of the southern French island fill his days with joy. 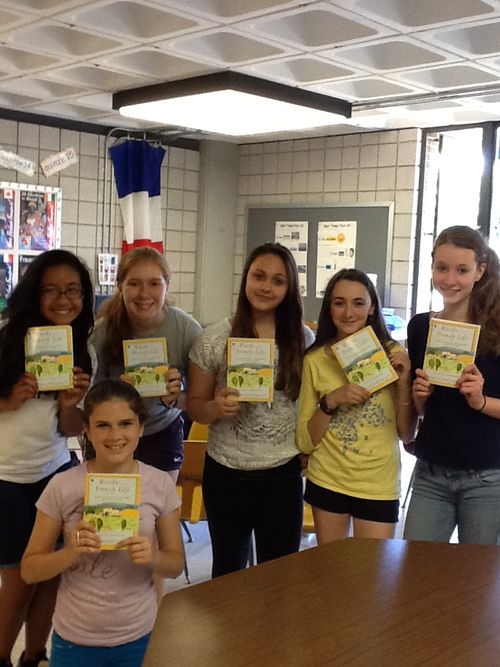 Photos and words like this are the best reward for sticking to my writing dream, and pushing past all the doubtful moments!  Mille mercis to the students in this photo, and to their thoughtful teacher!

Hi Kristin,  I had an amazing 8th grade French class this year and some of the girls fell madly in love with Words in a French Life.  We did a weekly reading period on Mondays and they would literally fight over who got to read it.  Because I enjoyed them so much, I gave all of the girls in the class your book and they were ecstatic! ... I thought you might enjoy the picture! 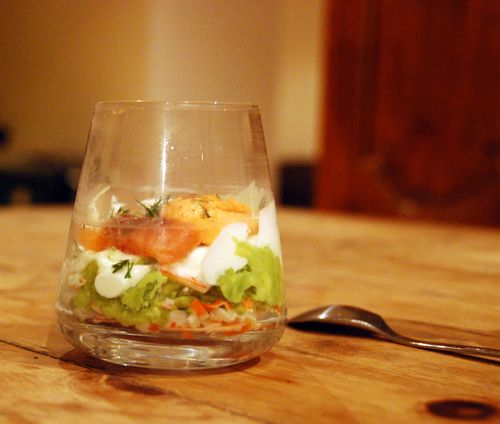 Another recipe--maybe we're on a roll?

Three sum years ago, when he was 15, our son Max had an internship at a local starred restaurant. There, he learned how to make verrines! I came across this photo in my archives, which comes in the nick of time: we have several guests this month and I've been needing some kitchen inspiration. This verrine (from the word "verre" or "glass") looks simple:

...a layer of chopped surimi (will replace this with real fish...), a layer of guacamole, a layer of sour cream, and a layer of smoked salmon. Top with anèth, or dill--something that happens to be growing profusely in our garden! 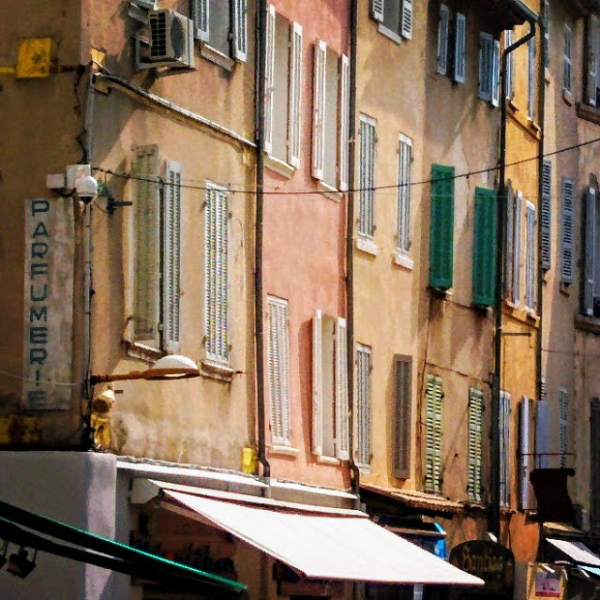 Looking back on this post, written in 2013, I did not know we too would move to the historic town of La Ciotat in the summer of 2017.