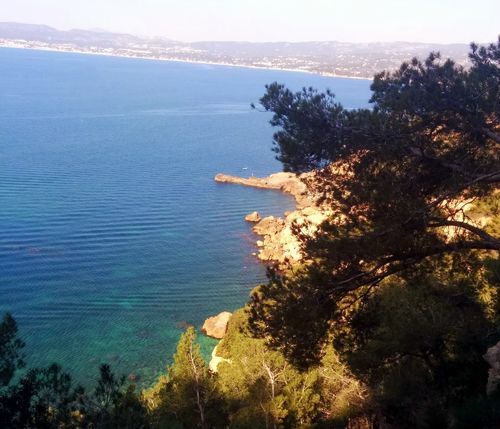 It's time to meet up at my place--or very near it! Since leaving Domaine Rouge-Bleu, where we welcomed visitors weekly, I have not organized a cozy get-together. How about an April rendez-vous? More details in the story column below... First, the expression of the day:

: to be taller than someone else, so tall you can "eat soup on their head"

Example Sentence
Today's colorful expression was given to me by my friend Sophie, after she saw my 18-year-old for the first time in a year: Here's what Sophie said:

Sunday's hike along the turquoise coast spring-cleaned my soul! And it got me thinking: why not plan another meet-up? This time with readers!

The little fishing village of La Madrague (a stone's throw east of Cassis) is a real bijou. I love the classic pointu fishing boats, the knotted filets de pêche drying along les pannes, or landings, the line-up of cafés and the sun-dried characters that seem to live there.

As I zigzag along the quai, imagination in full swing, the heart of me longs to know every seaworthy soul! On second thought, let me look that one up and see if it's really what I mean:

Fit? Ah là là, non! That would leave out the most important travelers: the misfits!

What use is life's voyage if we're always clamoring to join our "seaworthy" sisters? The ones waiting on the shiny boat? Might as well offer our thin wrists right now--and be led like thieves, via the speedcraft's connecting ladder.

Meantime the misfits beckon! A rowdy class on patched-together rafts, they're headed full steam ahead--fueled by a zillion little vapors.

Perhaps. Et alors? Who am I to judge!

Better to search for that fleck of light in a misfit's eyes. Can you see the sparkle? And if you look closely enough, régardant de très très près, you might even catch it: the glittering coattails of a zillion little vapors leading to l'infini.

I hope you enjoyed today's story which, ironically, veered completely off track from the first nonfiction paragraphs! I'm reminded it's not a bad thing to let go and just see what happens! Will you try this today? Letting go of rigid planning? Let me know!

Comments
Also, let me know if you'd like to join me for a meet-up in April. I'll take note of the dates you mention, and start planning some reader rendez-vous. Click here to comment. Beyond a delicate wooden fence, Le Grand Bleu, or Mediterranean Sea. In the background the area called Les Lecques. 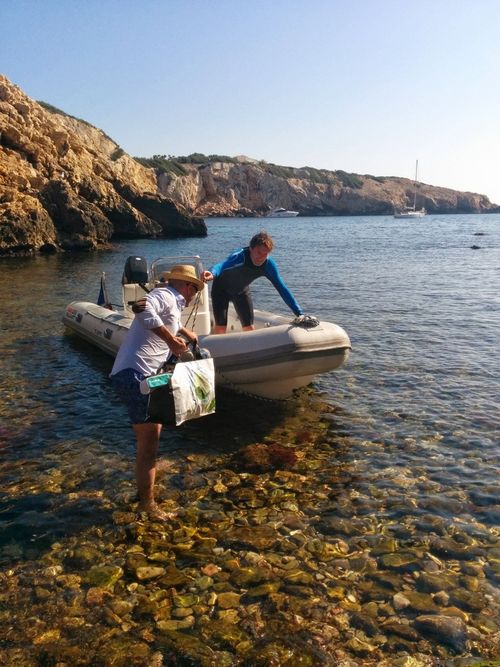 Jean-Marc and his high-school buddy, Nicolas (who was best man at our wedding, and who took this steamy anniversary photo on the same beach last summer! and who appeared here in our jittery wedding photo, in 1994: 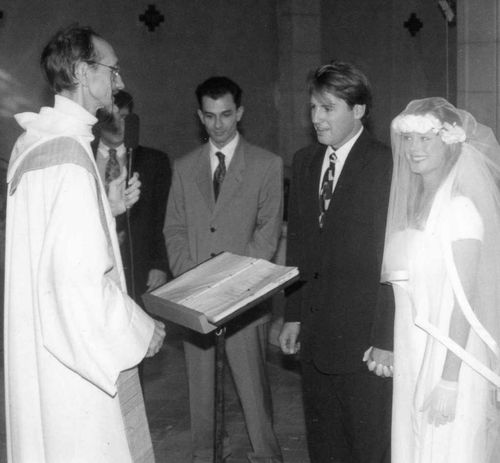 That's Nico, between the priest and Jean-Marc (who looks like he's getting cold feet...). 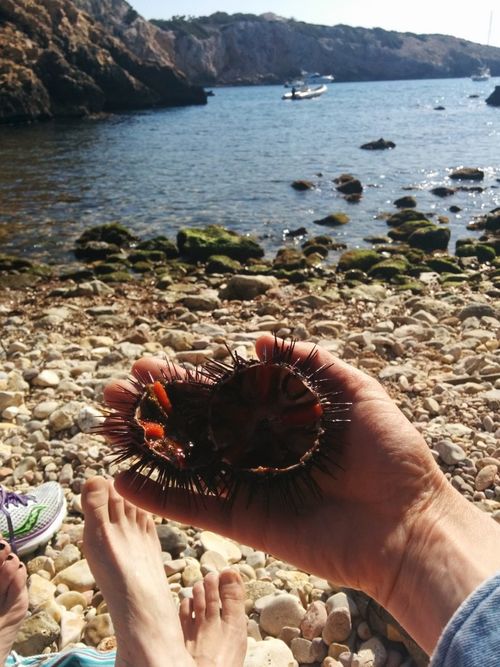 Jean-Marc was in charge of the picnic, which began with an oursin, or sea urchin apéritif. He hunted these a few meters off the pebble beach. He also served up les oeufs de lompe and tarama (fish eggs and fish egg purée), smoked salmon, mini fromages de chèvre (goats' cheeses), and for dessert, Sophie and Nicolas brought kiwi and raspberry fruit tarts, lemon tarts, and chocolate tarts (minis). (Those are Sophie's toes, left. Sorry I didn't get her picture!) 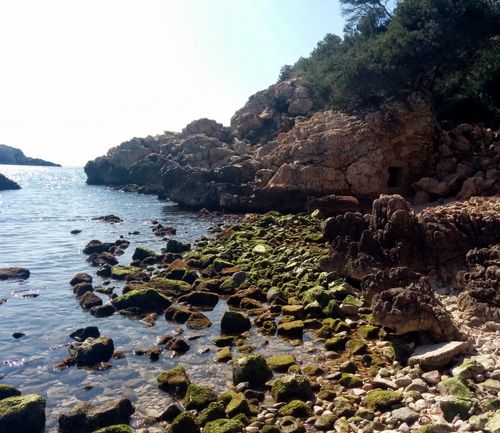 That grotto, to the right, is where they put all the litter bugs, or pollueurs. You DON'T want to drop trash on French beaches or they'll toss you in a cave. (Not really. But could it put a stop to litter bugs?) 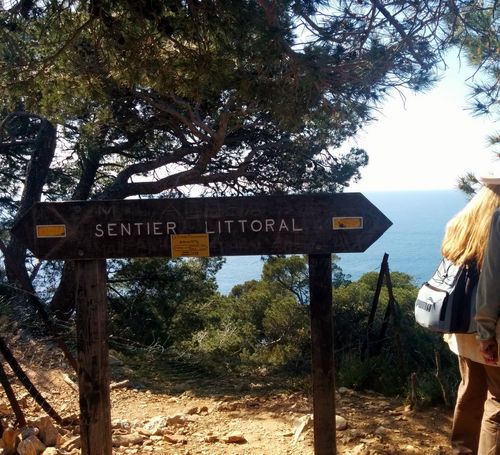 Back at the port de La Madrague. Look at that scooter. Some people know how to get around!

If you enjoy French Word-A-Day, maybe a friend would to? Forward this post, and your friend can sign up here. 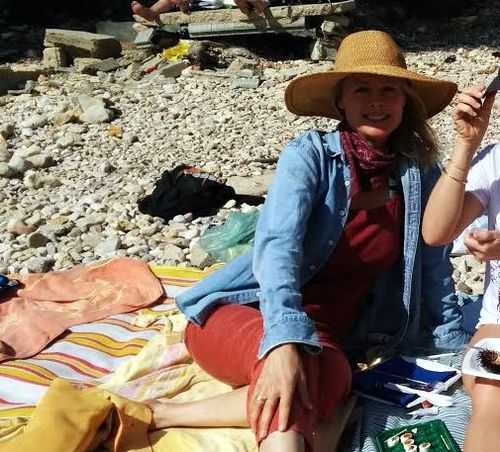 The hat is great protection from the sun, and the bandana keeps my neck from turning rooster red. Tell me your sun protection tips. I'm always interested! 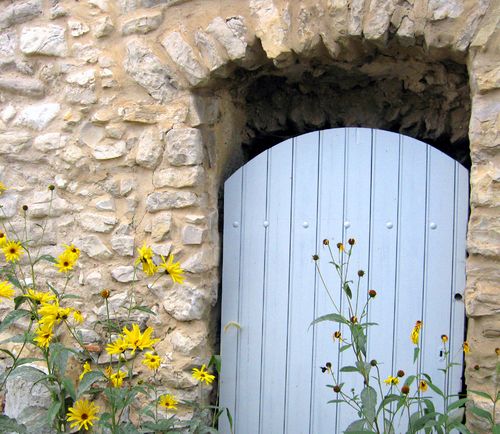 If flowers could talk (and who says they can't) then these are shouting ALLEZ ZOU! After oggling this sunshiny plant forever--and owning it, for a time--I broke down and ordered the Helianthus grosseserratus or "sawtooth sunflower" seeds. If you, like me, believe your garden or balcony or windowbox cannot live without this jumble of happiness, then order some seeds like I just did!

And now for some French to keep you in the know:

I was going to write you a story when I realized that today's definitions are as entertaining and inspiring as anything I could cook up for you this morning! (So later I'll tell you about our secret magic wine barrel--the one that grows 300-year-old olive trees and maybe lilacs and figs and ladders to heaven, too! Thank God real life keeps fueling these anecdotes. A writer could not make this stuff up!)

Now for those definitions I was telling you about. You can listen to them too! Just click on the following links and hurry down to the French words beneath. Allez. Zou!

Sound File: Download MP3 or Wave file and listen to Jean-Marc read all the French text, below (the first is by Wikipédia):

And here's a wonderful definition from Zoucom.com

Did you enjoy this last definition and find it as cheering as I did? Did you read it a second time, too? May it be just the invitation to begin  your weekend. Allez, zou! Have a good one!

Two places to stay in the South of France:

New rental in Provence! La Baume des Pelerins, in Sablet--spacious, comfortable the perfect place to return to after a busy day’s sightseeing, bicycling or hiking. 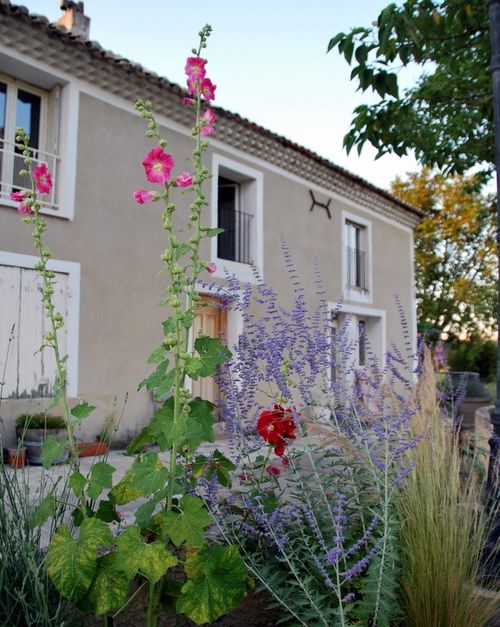 Remember those "sawtooth sunflowers" I told you about, earlier? They, and we, lived here once upon a time--along with these beautiful plants you see in the photo (all gifts from Malou and Doreen, "the Dirt Divas").

When Caroline and Thomas bought our vineyard, Caroline thoughtfully dug up and sent back some of the plants--the first, "eurphorbia" (I'd heard it was an alternative treatment for that skin cancer, but Caroline urged me NOT to experiment. I listened to her... but wanted the plant, anyway). Caroline also collected seeds from my favorite sawtooth sunflowers (previously dug up at Malou or Doreen's and transplanted in front of our grape vines). But I've somehow misplaced the seeds! (They've got to be here, in a pocket... somewhere. Hence, my recent online order!

The good news is--and the reason for this long-winded introduction--you can soon meet Carolyn and Thomas at their upcoming winetasting (near Nice). I'll be there too and if you ask me, I'll even pass you a few of the sawtooth seeds I've been going on about! I'll put them in my pocket (on second thought maybe that's a bad place, after all?)

Very excited to have received this invitation from Julie and Dan, who are happy to extend it to you, too! Julie and Dan write:

You are cordially invited to a wine tasting on Saturday, 01 February 2014. Domaine Rouge Bleu (www.rouge-bleu.com) is a Côtes-du-Rhône winery, ideally situated between the revered appellations of Gigondas and Châteauneuf-du-Pape. The wines of Domaine Rouge Bleu–Dentelle, Mistral, and Lunatique – have  garnered accolades from numerous concours events and wine publications, including Wine Spectator, RVF and Guide Hachette.

The proprietors, Caroline Jones and Thomas Bertrand, will lead a tasting of select Rouge Bleu cuvées and vintages and share their philosophy of terroir and their passion for the principles of bio-dynamic farming and natural vinification. Please join Caroline and Thomas at: Le Tire Bouchon 198 Chemin des Comtes de Provence 06650 Le Rouret 06 95 08 74 70

Hope to see you there! I won't forget those seeds--and maybe I'll have some others... 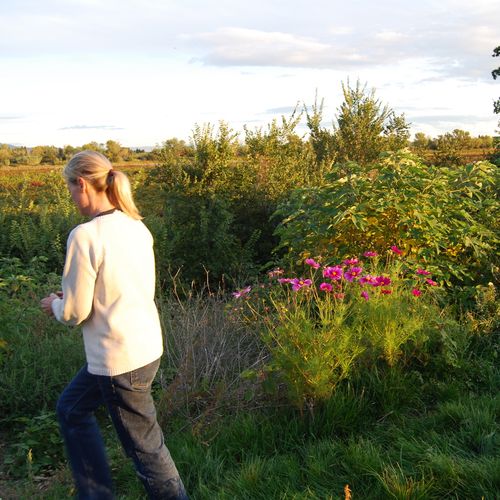 Collecting cosmos seeds at Domaine Rouge-Bleu. About to stick them in my pocket. And then forget all about them. 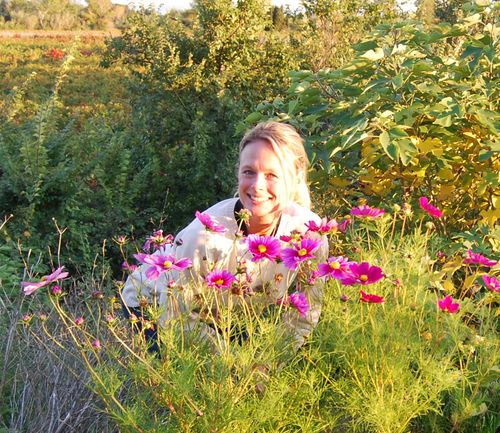 Enjoy this bouquet and have a bright and wonderful weekend.