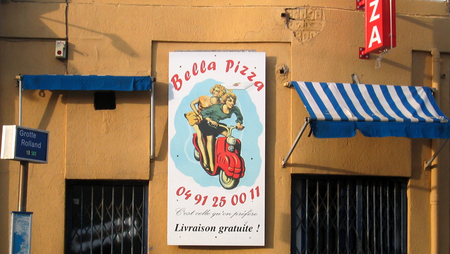 In the eighth arrondissement of Marseilles, at my mother-in-law's apartment complex, Jean-Marc and I climb several flights of stairs until we reach the last two doors in the building. One of the portes has a sign on it that reads "peinture fraîche." The wet paint warning causes us to automatically curl our shoulders inward and pull our suitcases close.

Jean-Marc slides la clef  into the keyhole and pushes open the door to my belle-mère's one-bedroom apartment.

"Vas-y," Go ahead, I say, trying to catch my breath after stepping off the French Stairmaster. We have just climbed four flights of stairs! How does my poor mother-in-law manage without an ascenseur?

My belle-mère's apartment, where we've come for a weekend getaway (Belle-Mère is staying with the kids, at our place), carries me back to my first impressions of France, to the quirky things I'd forgotten (after having gotten rid of them, for comfort's sake), to the Frenchness that's worn off things and places—the foreignness I wish would still pop out like so many doors on an Advent calendar, each with its own sweet cultural surprise.

All that stair-climbing has caused me to work up a sweat. After depositing my overnight bag in the bedroom, I make my way to the salle de bain. I have to enter my belle-mère's tiny bathroom sideways, inching my way to the tub known as un sabot, which in French means "slipper bath"—and for good reason: the bathtub is only slightly bigger than a pantoufle!

The tub has an unusual bi-level base—stand or sit! I choose to stand, but when I automatically reach out to tug closed the shower curtain, there isn't one. Oh yes, I'd forgotten about that: shower curtains are rare in France!

A bit awkward in the curtainless bain-douche, I juggle the shampoo and the savon—all the while balancing a hand-held shower head so as not to flood the bathroom.

After the shower circus, I make coffee on one of those space-saving, three-in-one appliances where the lower drawer is a dishwasher, the middle section is an oven, and the burners are on top. I put water on to boil and go searching for a coffee mug; instead I find a stack of porcelain bols and am reminded that the French still drink their café-au-lait from a bowl, just as they still eat their cake with a spoon and not une fourchette.

I spend the rest of the weekend running into the Frenchness that I had left behind when we packed our bags and left Marseilles for the countryside ten years ago, for a home which has, over the years, gone from French to functional, from quirky to comfortable, from bi-level to... banale.

From the word sabot we get the verb saboter: "to bungle," or "to walk noisily." Come to think of it, it's no wonder I've become desensitized to the uniqueness that is France: I've been making too much noise and can no longer perceive it!

May this be a reminder to tiptoe past the Gallic culture that still whispers out from every French nook and cranny, to travel forward—light on my feet—so as not to "sabotage" this ongoing French experience.

(Text from here, on, will not be included in the book) 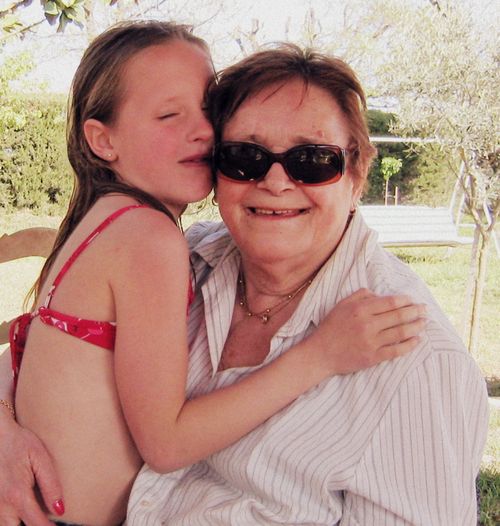 My mother-in-law and Jackie. Photo taken at the time this story was written, in 2006

My mother-in-law and I are lounging on the back porch, sipping le coca and eating pistachios. We chat about tout et rien, while admiring so many wildflowers that have sprung up across the lawn.

Michèle-France has borrowed her son's T-shirt; the words on the front read "Señor Frog's." Under the title, there are four caricatures—all grenouilles. Two of the frogs have on sunglasses, the other two, sun hats. All four frogs are wearing striped swim trunks. My belle-mère's pearl necklace is peeking out of the T-shirt; the combination of frog-T-shirt-with-pearl-accent makes an amusing, if unintended, fashion statement.

"Il fait chaud ici," my belle-mère says, pinching her wool pants. "I don't know what to wear this time of year."

Sitting beside her, wearing a tank top and corduroys, I can relate. "Moi non plus!"

As we laugh I catch a closer glimpse of my belle-mère. Michèle-France's fingernails are painted a glossy red. They are not too long, not too short: simply elegant. The string of gold beads around her wrist adds a delicate touch. My own nails are chipped and rugged. I would rather take a nap than paint them.

"Mothers don't always have time for les petits soins," my belle-mère sympathizes. Her words assure me she's no judge. She knows I am not lazy. Her eyes lock on the wildflowers as her thoughts take her back to early days, to rearing three turbulent children. "Only one year apart in age! First Jean-Marc, then Cécile, then little Jacques." She shakes her head, tapping it comically for effect. Her exaggerated gestures are humorous but, like a clown's tears, they distract us from the suffering heart within. I know she didn't cope as well as she would have liked to. When will she forgive herself?

"Nice shoes..." she offers. Our thoughts drift back to the present.

"These old things?" I tease my mother-in-law, who laughs.

"Well I've had THESE for eons!" Michèle-France retorts.

I look down at her patent-leather loafers, as if seeing them for the first time. Suddenly, they represent so much to me: a lifetime or two (my son's and daughter's), the duration of our belle-mère/belle-fille friendship, and the number of years that I've known my husband. The dainty loafers with the chic square buckle have appeared at marriages and baptisms, as well as funerals and hospital stays. I've seen them buffed, I've seen them battered. But today, oh happy day, how they shine!

Your Edits here please. Thanks for pointing out any grammar, punctuation, or story-construction problems here in the comments box. On the other hand, if it's a smooth read, thanks for letting me know that, too!

French Vocabulary (under construction... anything missing?)

la grenouille = frog
la belle-mère = mother-in-law
tout et rien = everything and nothing
un dicton = a saying
en avril, ne te découvre pas d'un fil, En mai fais ce qu'il te plaît = literally "in April, don't remove a string (of fabric); in May do as you please"; Note: this saying hints at spring weather. A warm day in April can fool people into wearing less clothing (and catching a cold when cooler weather sneaks in!) May temperatures are more stable and one can "do as one pleases".
les petits soins = fussings (little self-care treats)
la belle-fille (f) = daughter-in-law