How to say "a thought" in French and rewiring the brain (neuroplasticity!) 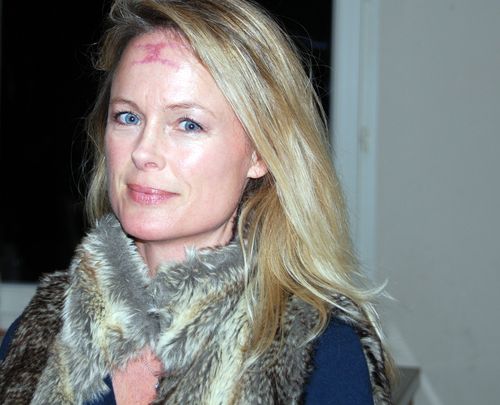 Where is the mind located and do our thoughts really have substance--as scientists have observed? They say our thoughts can control our pain levels and more. I believe this, having used mind over matter while receiving several shots during skin cancer removal. Now if I could only train other parts of my brain--especially the emotional parts. Note: the fur, above, is fake. I'm wearing my daughter's vest.

A DAY IN A FRENCH LIFE

In an ancient outdoor amphitheatre, while watching Lillywood and the $@#&! bring down the house, I stood up, kissed our friends goodbye, and stormed out of the concert.

Making my way through the maze of Arles, trying to find our car, I looked over my shoulder again and again to see Jean-Marc lagging behind me. "Why don't you catch up!" I snapped.

(Before being labelled the castrating wife, let me share this: I'm currently working on a monumental task... the outstanding effort of retraining of a brain (my own). And what you witnessed in paragraphs one and two, was yet another discouraging backslip! )

It is disheartening to lose ground on the path of self-improvement. But it gives me hope to know that a positive rewiring of the cerveau is not as impossible as it seems. By taking every thought captive, we can begin the task of replacing our negative thoughts with positive ones--and so forge a new path of positivity.

My goal is to be more flexible. To go with the flow. To be easygoing. To say "No bother. Things change! AND CHANGE IS GOOD!"

But it's a one-step forward deux en arrier process--this thought replacement business. Step one is to examine my troubled thinking: what frustrated me last night--what had me steaming out of Arles, my husband in my wake, was something I'll call "The Let Down Factor"--my body was reeling with it!

The Let Down Factor has to do with suffering. In a nutshell it's this: you are voluntarily engaged in an uncomfortable chore, one that has a start time and an end time. For this reason, you agree to suffer the task--knowing it is pleasing (and or helpful) to someone else, though painful to you. You can struggle through the task because you can "see the light at the end of the tunnel" and, so seeing, you set your heart and your mind on the bright light--while ignoring the inconvenience. Like this you can confidently suffer the moment knowing how long that moment will last.

The Let Down Factor occurs when the light at the end of the tunnel fades to darkness. This happens when the "stop time" is renegotiated (the "moment" is stretched) by a second party, causing you to lose sight of the destination (or "Pain's End"). Here is a classic example:

Harvest Time. The Let Down Factor is a given when you agree to help a friend or family member with the grueling task of grape-picking. You begin naively enough setting your mind to the task, ignoring the sweaty droplets running down your face and the sticky scratchy weeds scraping your skin. You hold your bladder, knowing at break time you'll be back at the farmhouse with its private throne.

"We'll break at the end of this row," the winemaker says.

"Yes!" your brain responds, beginning the let down process: letting down its guard, letting the dulled senses awaken (you now feel the scratchy weeds, the annoying sweaty droplets--and that nagging need for which you'll soon find relief! You don't mind the pain because break time is coming up, as promised!)

...And then La Grosse Deception. The Big Disappointment.

"We're so close..." the winemaker says, changing his mind (and your destiny). "We may as well finish these last two rows!"

Amazed, you look up at the never-ending vine horizon, the scratchy weeds circle around your knees, and the sweat slips into your eyes, stinging them. And you can't hold it anymore! Panic sets in. Your mind paints a bleak, humiliating conclusion to this story. Whereas a moment ago you were numb to the environment, suddenly all your senses are alive and kicking--ready to get the heck out of the Godforsaken grapefield. Alas, it's not gonna happen!

Enter The Let Down Factor, or Extreme Disappointment

Had you known the true "stop time" (end of task or effort) you would have remained in your "buffered zone", keeping your pain under the hood of your physical engine. Instead, you let down your guard and in rushed the sensory torture.

So how does all this tie in to a wonderful concert in an ancient ampitheatre in Arles?

Faulty baffles, for one. The speakers pounded across the outdoor arena, up the thick stone slabs on which we were seated, and into our chest cavities!

"I don't like it when I can feel it booming in my poitrine!" my friend Emilie remarked.

She was right. It felt as though every organ in my body was bathed in the liquid pounding vibration.

I looked over to Jean-Marc, who had his hands over his ears (this somewhat reassured me. I wasn't a wuss after all--the music really was too loud!)

"C'est saturé," another friend complained of the sound. "Oui," Jean-Marc agreed, getting up twice to have a word with the technical crew, but the ear- and organ-busting beat continued. Unwilling to let it spoil his evening, my husband searched for a solution. Leaving his seat near the speakers, he disappeared....

But not before our friends began talking of leaving a little earlier than planned. Such a reasonable idea of theirs, I thought, to wait for the last band, and then enjoy a few songs before leaving. The thought perked me right up, knowing we, too, could soon be leaving. My motivation was renewed with the fixed destination in my mind. (I could almost feel myself crawling under the cozy covers back home--my ears filled with soft cricket sound and not this horrible pounding!)

What a good idea! I thought, beginning to set my hopes on the near future. "Do you mind if we leave a little early too?" I asked Jean-Marc.

Jean-Marc didn't mind, and I was thankful for the sacrifice he made. Only, come to think of it, he hadn't made it yet. In fact, where had he just skipped off to?

Surely he'd be back, as promised, after the 2 or 3 song limit. He'd promised. But when the second song finished...and the third... my thoughts began to reel and that Let Down Factor began wreaking havoc on my mind:

You're going to arrive home at three in the morning. Have the dogs been fed? You've got to get up early. You won't be able to work with a late-to-bed hangover!

My thoughts were interrupted when my friend Isabelle reached over to kiss me. "See you later! We're leaving."  All three songs were up, the others were following through with the plan--that same plan I had set in my own heart in order to endure. But now those speakers and the late night was getting to me. The light at the end of the tunnel had been dimmed. When would we be leaving now? The unknowing made the moment hard to bear.

Looking around, I noticed everyone else was relaxed and having a good time. Why couldn't I be the same? Maybe all that beer they were serving helped dull the audiences' senses--while waking their energy. Maybe after ten years, now was a good time for a drink?

My frustration began to grow and grow.Ce malin! That sneaky one! Jean-Marc had approached the stage where the sound was equalized. That meant we wouldn't be leaving after "two or three" songs!

And yet, after the fourth song Jean-Marc reappeared--but by then I was standing up with my bag under my arm. I kissed those friends that were staying for the end of the concert, and motioned to my husband that we were on our way out!

"No, it wasn't the one or two extra songs that bothered me," I argued, trying to find where our car was parked.  "It's that I was set on leaving at the promised time. Not knowing where you were or when you'd return was extremely frustrating. We might have stayed all night!"

Adding to my annoyance was my husband's gentle swaying. He'd enjoyed a few drinks over the course of the night and his relaxation was at odds with my frayed nerves.

It hit me then. I didn't have to go on suffering that way. I could change my thoughts and in changing my thinking I could be at peace.

"I feel bad you didn't get to see the whole concert," I admitted. (Stumbling through Arles, I was now following Jean-Marc, who, tipsy, could find our way 1000s times better than his sober wife, who was lost again and again.)

"Don't worry about it. It all turned out well." My husband's words were soft.

"I'm just not a night person," I explained. "And I don't like it when plans change." Listening to myself talk, I heard the familiar self-limiting beliefs. But it wasn't too late to change... I could alter my thinking and expand my limits. I could once and for all enjoy the moment--or at least allow someone else too!

"It was such a chance to be there tonight, in an ancient outdoor theater. I'm glad we got to hear the last band." Seated in the car now, I reached over to touch my husband's leg and continued the positive affirmations:

"Thanks for such a beautiful evening...." I whispered, and on saying it, I began to feel the gratitude that was first born in my mind. Thoughts really do manifest.

Comments and post note: I continue to retrain my brain after a lifetime of limiting thoughts. I hope to talk more about the subject of rebuilding the brain or neuroplasticity. Let me know your thoughts, here in the comments box. Can you relate to the "Let Down Factor"? 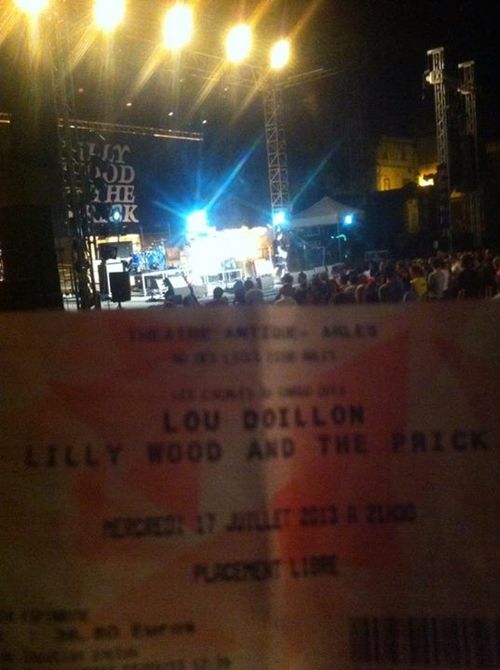 Last night's concert in Arles. Thank you, Pierre Casanova, for this photo I stole from your Facebook page. And thanks for a great evening with friends, beginning at Ariane's Natural Wine bar and ending at an ancient Roman theater.