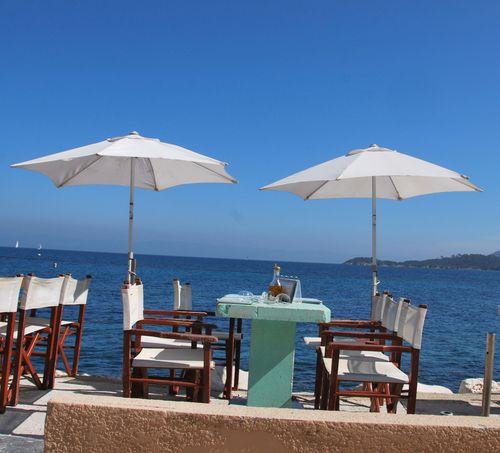 Jean-Marc and I stole away to Porquerolles island recently. Because it was play and not work, I didn't pay a lot of attention to detail or think about what could be shared in another France city guide.

This is where you come in. If you have been to Porquerolles, or have researched it while planning a future trip on the southern French island, please share with us here some of the activities and tips that come to mind:

Meantime, I'll share a host of photos and add some interesting facts beneath them, in hopes that you'll be inspired to visit this little pedestrian island only a hop, skip, and ferry ride from the coat of Giens. 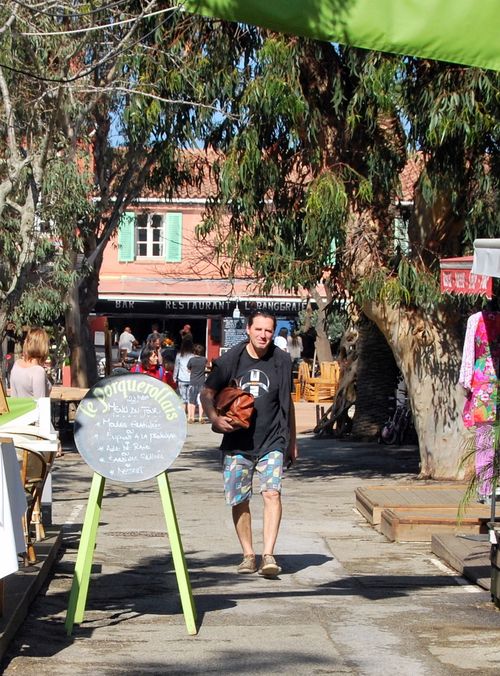 Jean-Marc and Mr Sacks on the main square in the village of Porquerolles. Eucalyptus trees frame la place which is lined by boutiques and café-restaurants. 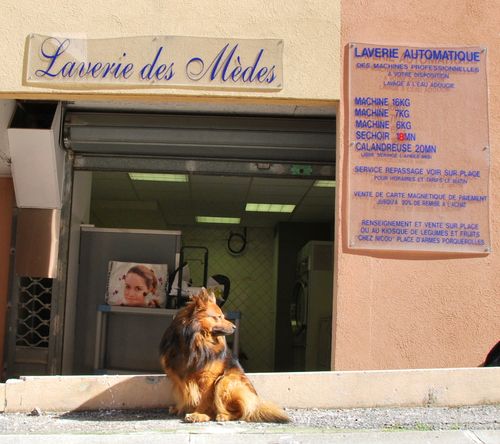 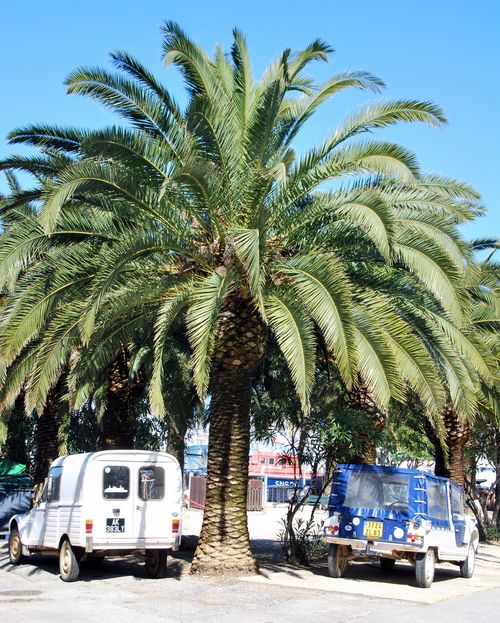 You cannot bring your car onto the island, but you can appreciate some of these local classics-on-wheels. The one of the right is a Méhari. You see lots of these off-roaders threading through all the foot traffic. 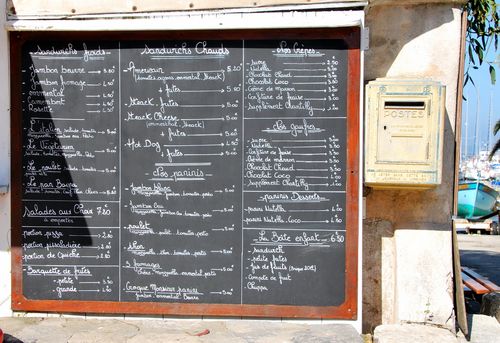 Save a few euros by ordering a sandwich and eating it on one of the many benches that overlooks the gravel square or the port or, better yet, take a picnic and hike inland a few kilometers for a view of the vineyards and vergers, or orchards or for this view: 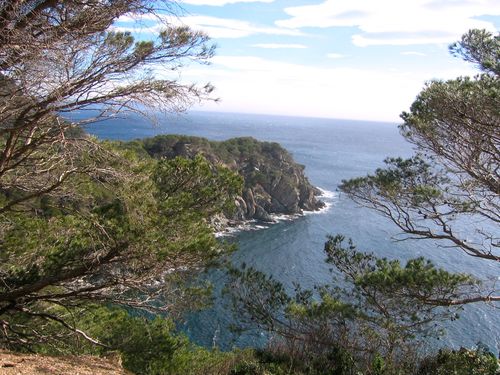 Off the main square there is a long alley of what seem to be bungalows. This narrow had one story habitations on either side and one had the urge to jump up and down like a pogo stick... to see what sort of bucolic scene was on the other side of these walls.... 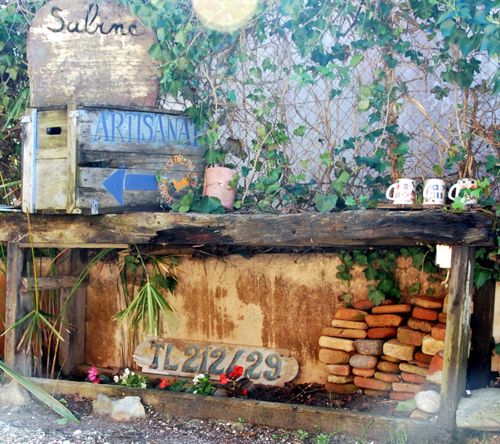 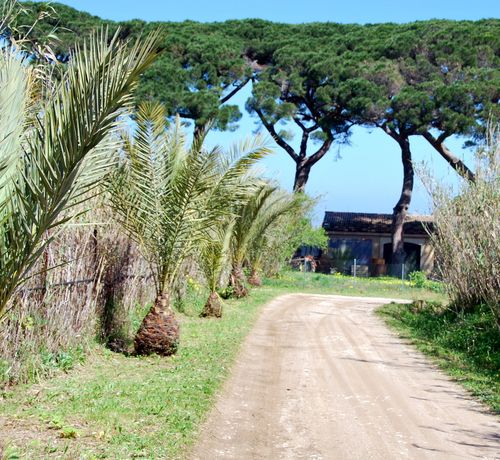 Walking towards Domaine Perzinsky, on our way back to the village.

Porquerolles vineyards were among the very first to be classified Côtes de Provence. There are three vineyards on the island: 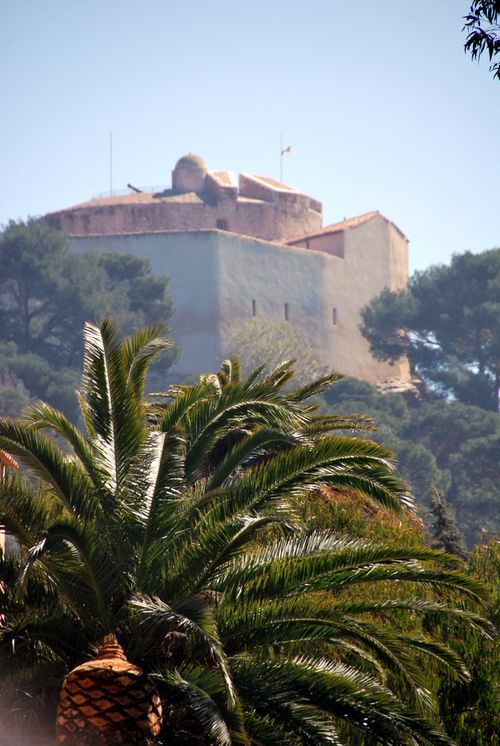 There are nine forts on the island of Porquerolles, including Le fort du Grand Langoustier (pictured) and Le fort Sainte-Agathe. 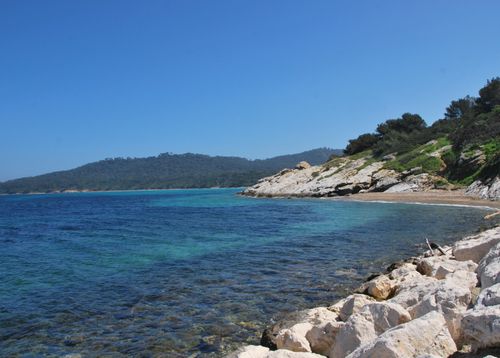 From the port of arrival, this is the first beach on the left. Pass in front of all the cafés, go around the corner and you're there! Off season you'll see this peaceful scene. 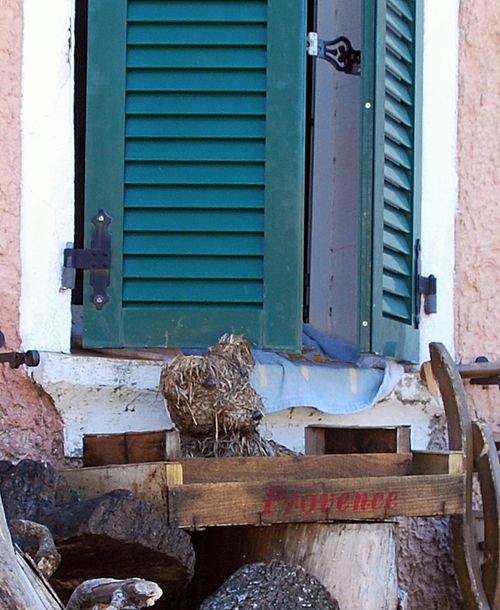 The laid back islanders on Porquerolles are known as les porquerollais (see exhibit A, above... and if you love teddy bears, see exhibit B here!)

To respond to this post, thanks for leaving a message here in the comments box.

For help creating this edition, I looked up facts in these guide books/sites. Click on the titles to view them: 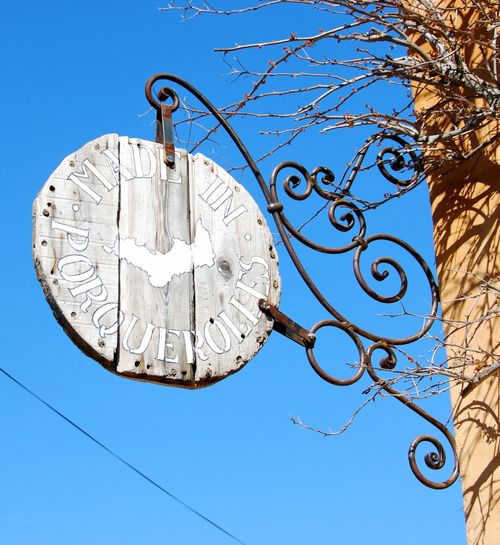 Has this post tickled your fancy for Porquerolles? Will you be adding  it to your bucket list? I'd love to know, here in the comments box.

Check out some of the excellent reader-submitted tips or What to do in France guides: 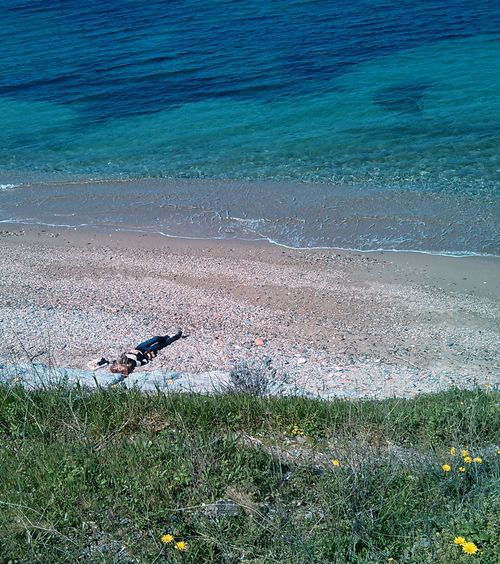 After lunch I borrowed Mr. Sacks for a pillow and took a nap while Jean-Marc went hiking and photographing.

tergiverser + pictures of the French island of Porquerolles 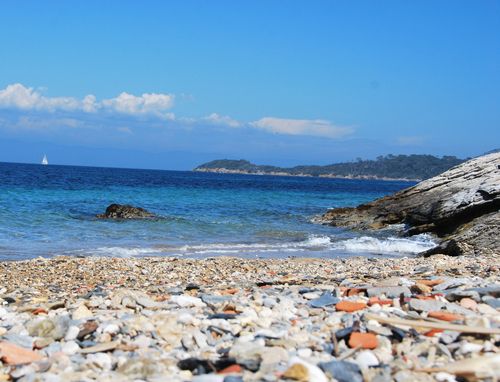 The island of Porquerolles is only a 15-minute ferry ride from coast (near Giens and Hyères). More, in today's story column.

: to hem and haw, to dither

Also: to delay, to procrastinate, to put off, to dally, to shilly-shally or dawdle or linger or tarry...

Lorsque Jean-Marc m'a invité pour un week-end sur l'île de Porquerolles, j'ai tergiversé. Est-ce qu'on pouvait tout laisser derrière nous? When Jean-Marc invited me for a weekend on the island of Porquerolles, I wavered. Could be leave everything behind us?

When Jean-Marc suggested we escape the renovation for a night--and get away to the nearby island of Porquerolles--I hemmed and hawed, unsure about leaving the kids and the dogs behind.

But when I learned Jackie was invited to stay the weekend at a friend's... and that Max had agreed to look after Braise and Smokey, I began to consider the break Jean-Marc was offering me. In the 7 months since moving houses--and all the decisions and disruptions involved in the process--it could be refreshing to have a change of scene.

And, after all, I thought, Max would be comfortable in the room where Mom had stayed: it was completely independent of the partly condemned house. He could even invite a friend over for the night (a change from all the party weekends he's been enjoying, away from home).

With our teenagers' encouragements, Jean-Marc and I left just before noon on Saturday. I suggested we visit the village of Bormes les Mimosas, which wasn't too far from the Giens peninsula and La Tour-Fondue, where we would be catching the 15 minute ferry to Porquerolles. 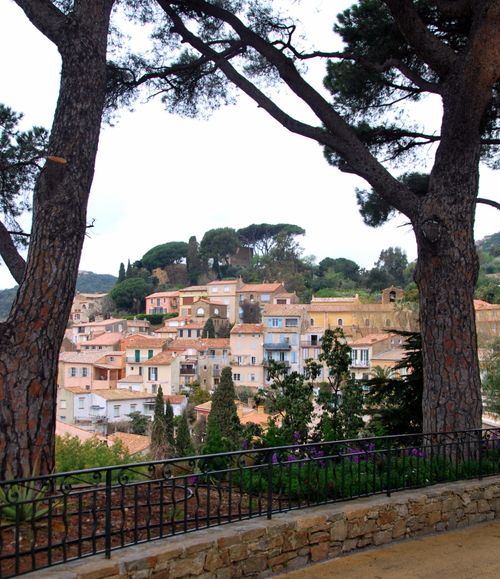 In Bormes les Mimosa we had lunch at Lou Portaou, where we had eaten 18 years before, on our honeymoon. Jean-Marc must have told the waiter the story two or three times and, rather than hush my husband, it occurred to me to rejoice knowing he remembered so much about our lune de miel.

After lunch, Jean-Marc followed me through the rain as I snapped pictures of one of France's most flowerful villages--only this early in April, many blossoms were still sleeping... if not all of them: 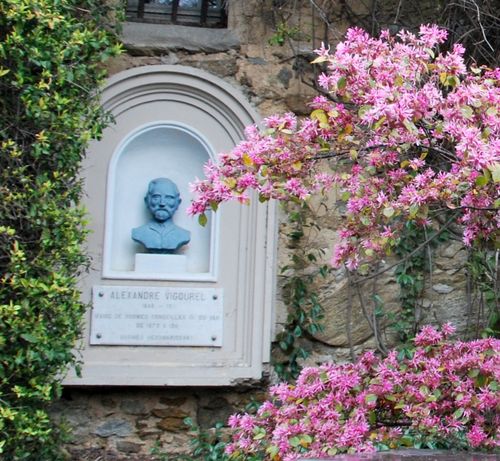 On our way out of Bormes, and not 3 hours after leaving home, we were surprised by a call from our daughter.... Would it be okay if she and her girlfriends slept at the house tonight? Jackie wanted to know.

Hors de question! I growled into our car's speakerphone. But Jackie eventually sweet-talked her way into an agreement. Besides, she informed us, she and her girlfriends were already back at our house....

Noticing my agitation at the unexpected change of events, Jean-Marc suggested we not let this ruin our weekend. "The girls will be fine," he assured me. They could hang out in the safehaven and we could order pizza to be delivered to them for dinner. 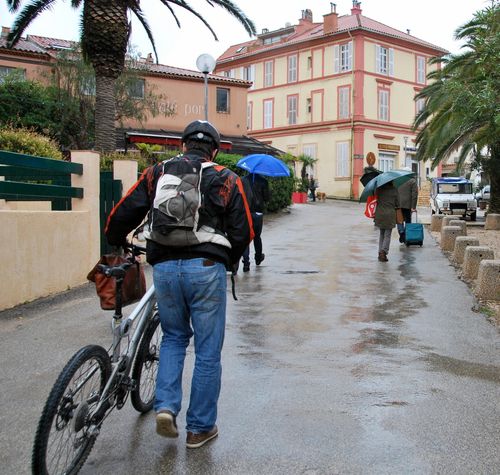 Photo: Entering the village along Rue de la Ferme.  Jean-Marc brought his vélo but we realized, later, that it costs more to use your own bike (ferry fees) than to simply rent a bike. (Notice his beloved leather bag... I need to add this one to the sacoche gallery....)

When our boat arrived at the island of Porquerolles we rushed beneath the rain from the little port right to our hotel, less that a 5-minute walk from the dock. Our plan was to relax the first evening, have dinner at the inn, then enjoy a tour of the island on Sunday, when the clear blue skies would return.

It was peaceful to be in an uncluttered room, away from the dust and all the renovation equipment. As it was still cold and rainy out, I slipped off my shoes and got under the bedcovers to rest until dinner. We were unable to get a room facing the sea and the port, but we had a cozy view of the church and the little square.

Taking advantage of the hotel's wifi connection, I logged on to Facebook. I noticed an update from Max posted onto his timeline for his friends to see.

That's strange, I thought, studying the snapshot of Max and his friends, who seemed to be gathered at the house of one of the kids. I shared the information with Jean-Marc, who smiled. "Are you snooping?"

Harrumph! My attention returned to the screen, where I studied the picture of Max and his friends, who were gathered on the porch of one of the kids. I began to notice the cigarettes and the alcohol and all the girls....

I strained my eyes, searching the photo, when a pot of flowers came into view. It seemed the friend's mom had planted the very same trio of purple, white, and yellow primaveras that I had planted...

...and in the same unmistakable cracked pot!

***
Post note: Returning from the island I found those purple and yellow and white primaveras at the other end of our garden, root side up.  As for the pot, it had disappeared.

As I inspected the front porch and the house, I complained to my daughter. "Well. If I were your brother and I had had a party when my parents were away, I would have done a much better job cleaning up the evidence!"

"But Mom," Jackie complained. "We scrubbed the floors!"

As for Max's punishment he might pack his toothbrush and join me for the spring cleaning of the Paris catacombs.

hors de question = out of the question 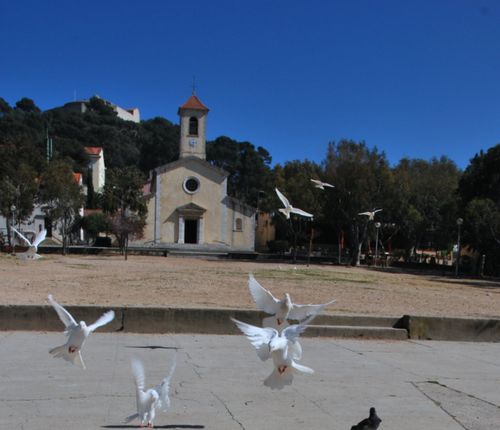 Our hotel room faced the Église Sainte-Anne de Porquerolles. Jean-Marc gave the rest of the morning croissants to the friendly doves... (re the hotel, we stayed at L'Oustau) 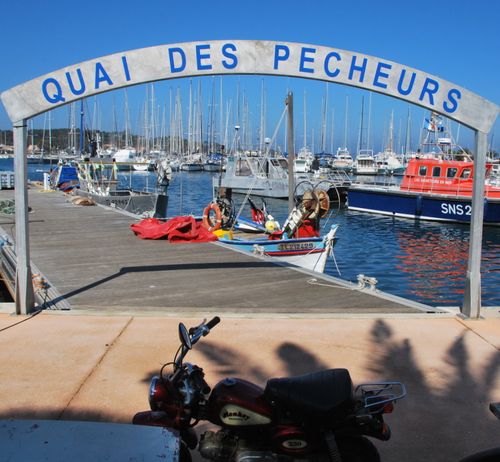 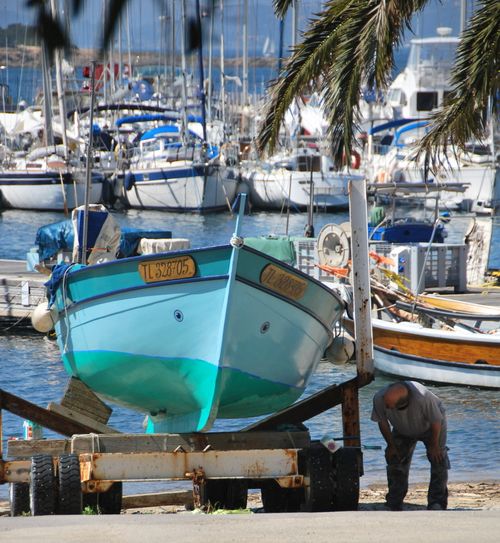