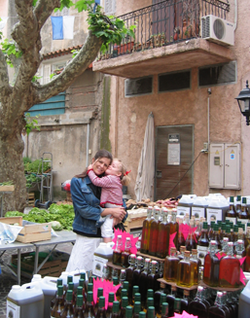 He had no shelter, no bread, no fire, no love; but he was glad because he was free. --Victor Hugo, from Les Misérables

Jean-Marc rolls two suitcases over to the gîte--a three room extension we had built several years ago when my mom came to share four seasons of our French life. Two of the rooms are now offices; the third is a guest room with an en-suite* bath.

My friend Kirsten, her daughter, Morgan, and I follow Jean-Marc into the chambre d'ami* where my husband leaves us to catch up on 'les bons vieux jours.'*

"How did we ever get our hair that big?" Kirsten muses, as we sit on the double bed flipping through photos and remembering the 80's in Phoenix, Arizona. I shake my head and hunch my shoulders. "Aqua Net!" Kirsten blurts out, answering her own question. I notice my guest's long chestnut-brown hair and how the sides are now swept back, smooth and flat, into a nacrée* barrette. I pat my head to verify that my own roots have not remembered those big hair days along with us.

I watch my friend unpack her bags, organizing her daughter's diapers and toys before hooking up a portable computer. Next, she unzips her carry-on and waves a red, white, and blue paperback through the air. "I'm going to find my inner French girl while I'm here!" she says, quoting from the book's title. Kirsten's enthusiasm is contagious and I snatch the livre* out of her hands and flip through it while she recounts her experiences since arriving at the Gare du Nord in Paris, where she found herself waiting in a block-long line for a taxi. As she held her sick two-and-a-half year old, she was surprised by a Frenchman who walked up to her and spoke. "You have a small child," he said. This line does not apply to you!" With that she was spirited to the front of the queue and ushered into a taxi.

The stories of courtesy continue. "When Morgan fell sick in Paris, I called the front desk and a doctor appeared at my hotel room within an hour!" And while buying pain au chocolat* at the boulangerie,* Kirsten paused to watch a venerable Frenchman walk in, open a cloth bag one yard long and receive, as if on cue, the baker's baguette. "I love this culture!" Kirsten says. "Don't you?"

I love how helpful and independent my guest is, I think to myself, as I collect the laundry she has hung out on the line for me in her quest to pitch in with the chores. (That is, until I discover the protruding pin marks...) I cringe at seeing how the clothespins have been pinched over the fabric, so that when the clothes are dry the material juts out in the most unseemly places... I check the
front of yet another T-shirt to find more clip clip marks (and not at the waist line). Either Kirsten's inner French girl is being racy... or my friend is up to another one of her practical jokes again. Ah, les bons vieux jours! 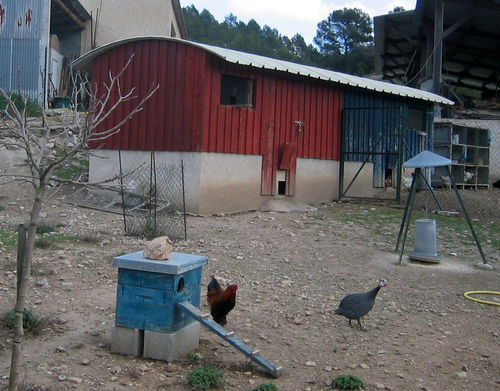 Crotte makers in the southern French town of Tarradeau (Var).

The first time we dined together, she remarked that I was stuffy. Specifically, she said she had the impression that she had spent the evening with "la Reine." Her remarks struck me as ironic, for it was this woman and her upper-class status which had so affected me.

So when it was my turn to invite my neighbor and her husband for le déjeuner, I took care to appear more relaxed, even though I was twice as nervous, given her previous impression of me.

Stuffy? Perhaps my nerves were to blame, for we were dining at the home of a local personality. Yes, I must have been a little bit crisp as I carefully sat down on an elegant sofa and began to take in my surroundings. The home was filled with romantic statues and modern-art paintings; fresh flowers dressed every table.

I thought about what I had worn that evening: did my attire lead her to classify me as coincée? I'd worn a long skirt and a button-down chemise under a cardigan. She had worn leopard and those glittery stiletto heels....

This time I wore all black, mindful to défaire one more button on my blouse. Though I had upped my efforts to be cool, relaxed, and very un-reine-like, my neighbor (now wearing sequins for our lunch date) had another agenda.

From the kitchen, where I was serving up steaming bowls of pumpkin-and-chestnut soup (soup, a.k.a. "the peasants' meal"... no queen would serve that!), I heard the laughter. Maybe it had something to do with my cooking? I had been so nervous at the idea of serving my neighbor's husband, a renowned chef!

When I went out to see what was so amusing, I found my husband and the invités standing, their eyes watering, their sides splitting.

My eyes scanned the living room for any "laughable" objects strewn about, bricoles or bibelots I had looked at so often that the novelty had worn off. I saw nothing ridicule. Next, I checked my clothes to see whether something had gone wrong during the dressing stage. That is when I noticed my blouse, which was tucked into my underwear.

My fashion gaffe wasn't in tucking a shirt into a culotte (people do this all the time—don't they?), but in wearing low-waisted pants. Dumb, dumb, dumb!

The good news was that I was looking as down-to-earth as ever! Just how much more relaxed could one get? Such a get-up might de-throne this so-called "queen" once and for all, or at the very least earn a few "graceless" points with the neighbor who thinks me so stuffy, so reine-like.

I soon realized that no one was looking at my underwear. All eyes were fixed to the floor. Curious, I followed my guests' gazes. That's when I saw IT. So dull. So deflated, So dégoûtante! A caramel-toned coil lying atop the tiled floor right next to the dining table.

I stood staring at it. Stunned. Une crotte de chien? But we don't have a dog....

Elbowed by the woman standing beside him, my husband began: "Kristi—what is that?" I looked to the others for an explanation. The blank looks I received only intensified my embarrassment. What happened next was the French version of The Twilight Zone.

Jean-Marc went over and picked up that crotte! Next, he handed it to my sequined guest, who then put it in her pocket....

That is when I realized I had been tricked—fooled by fake dog-doo, no less!

But how to react? As dumbstruck as I was, I did not want to lose my new "unstuffy" status! I had worked so hard to dash any misconceptions! And I did not want my delayed response to condemn my neighbor, who I sensed did not mean any harm, but had found in that classic gag what she felt to be a friendly icebreaker.

"Where can I get one of those?" I ventured, walking my stiletto-heeled guest to the door after lunch.

"Here. You can have it. It's yours!" my neighbor winked, patting me on the shoulder, as pals do. It seemed I had somehow passed the test and, I hoped, found a new friend thanks to an old jest.

Did you spot any typos? Are the vocab words in order (any missing, any extras?) Thank you for submitting your corrections in the comments box. On the island of Porquerolles: a Peugeot motobécane -- perfect for island cruising!