Where pigs and poules once roamed. The little barn before the bulldozers arrived.

The famous words of Général Lyautey:
Un chantier vaut un bataillon.
A workshop is worth a battalion.

"'A workshop is worth a battalion,' said Lyautey time and again, for, to him, an army was less a fighting machine than an assemblage of doctors and artisans."  -from "The History of French Colonial Policy" by Stephen Henry Roberts
.

On Monday, March nineteenth of the year deux mille sept* in the southern French town of Sainte-Cécile-les-Vignes, located in department number eighty-four (otherwise known as the Vaucluse), two notaires,* two sellers, and one of twenty-five* buyers spent three long hours transferring the title of one 17th century farmhouse, or "mas," and eight hectares (or 19.77 acres) of Côtes du Rhône vines. If the paragraph you are reading seems formal, longwinded, absurd, in any way affected, silly, glib, or downright confusing, well then you should have seen the sales contract!

Not twenty-four hours later (or the very next morning) the newly acquired property, formerly a haven of pay,* turned into a noisy, crumbling shon-tee-yay* when the bulldozers rolled in and the demolition crew arrived.
.
From hundreds of kilometers away, I followed the event via satellite.
"They arrived at eight!" Jean-Marc bubbled with enthusiasm.
"Eight o'clock?" I asked, pushing my ear into my portable phone.
"Eight of them!" my husband shouted back.
"Eight of them arrived at eight o'clock?" I gathered, still uncertain.

"It's really incredible!" Jean-Marc cried out as if he had just parachuted from the top of the Eiffel Tower...and landed beside the shimmering Seine. The shimmering part is true, for Jean-Marc was standing beside the crystal clear spring waters which border the farmhouse. There he stood, knee deep in the rush of land acquisition. From the sound of Jean-Marc's voice, I can now imagine that the thrill of bungee jumping is nothing compared to the brain's response when it careens towards its destiny, falling within inches of the sacred, rock hard earth; a vine plentiful, grape gorgeous earth. I listened as my husband's dream came true.

"Can you hear them?" Jean-Marc asked. Instead of rushing water, I heard a crushing sound. "They just attacked the cochonnière!" As the trucks roared in the background, Jean-Marc reported that the pig-sty had just been demolished. Remembering the white structure with painted blue doors, I quietly mourned the cochonnière. I would have liked to keep the pig-sty, naturally. I have never been a neat freak but find a kindred soul in the most dilapidated things.

The demolition centered on the pig-sty/poulailler* and the west wing of the farmhouse (where the tractor was once parked). The old saint, still in his niche* above the front door is intact, if a bit shaken, wondering if the Apocalypse was here, and the end of the world near. By the end of the day, the rubble was cleared away and Jean-Marc was one step closer to building his much longed-for cellar where he will produce and store his French wines.

Jean-Marc explained that he couldn't talk much longer, that he was racing to get things done. "Je suis à cent cinquante à l'heure!"* he exclaimed, adding that he had a surprise and was I sitting down to hear it? Before the roof turned to rubble, the demolition team salvaged stacks of ancient terre cuite.* One of the grayish terracotta tiles was dated 1696! The roof will eventually be replaced and the room carefully renovated--only with older tiles than I had imagined.

Chaos, disorder, bouleversement,* confusion, scuffle (and even bordel)* are all synonyms to the French word "chantier." I can vouch for that, having lived among French rubble in the past. And patience is the best prayer during renovation. But to utter one plaintive peep about this latest upheaval would be, as the French say, mal placé or "out of place". For the kids and I are far from the chaos this time, and by no means living in a shanty. But you would be correct to call our new digs a veritable "shon-tee-yay."* 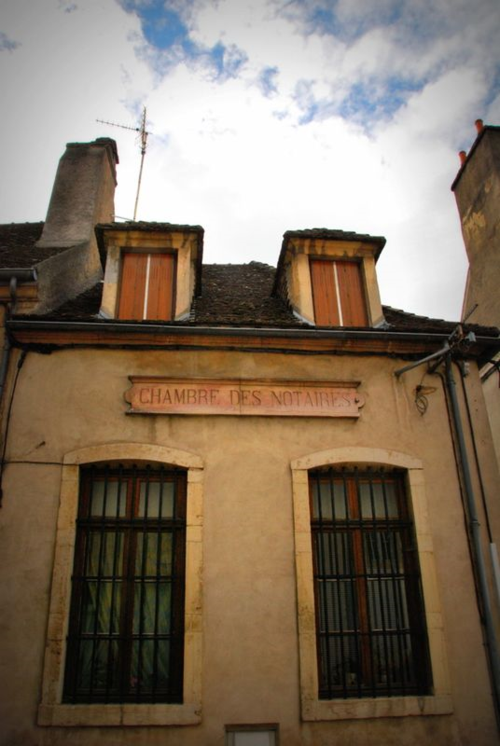 An old notaire's office in France