Woof woof! Bow wow! Aboiement (or how to say dog bark or barking in French) 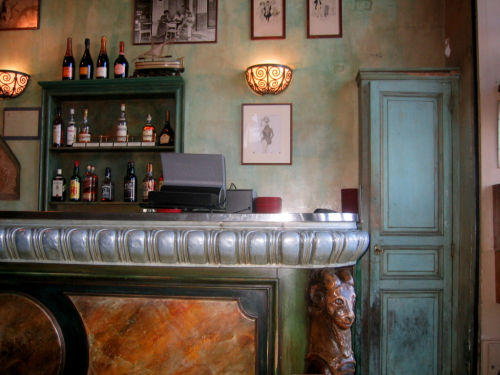 Nothing to do with today's word, just an iconic zinc bar in Marseilles: Le Bar de la Marine (made famous by Marcel Pagnol in his "Marius" Trilogy.

Audio File: Today it is 17-year-old Max's voice you'll hear when you click on the following file and listen to this French sentence: Download MP3 or Wav file

This morning I hurried downstairs to let out our dogs. I wasn't going to make the same mistake as yesterday by enjoying a rare grasse matinée. That extra thirty minutes sleep-in cost me a demi-heure of clean-up time after I was late helping Smokey get to his morning business. Quel dégât!

This time there were no suspicious odors wafting up the stairwell, and I reached le rez-de-chaussée to find the floors clear and dry. Ouf! The week was off to a good start!

Sliding open the porte-fenêtre in our kitchen, I was amused by the morning routine. Braise paused at the door, letting her son race past her. As Braise waited her turn she looked up at me, anticipating the usual acknowledgment.

"C'est bien, Braise! Très, très bien! Tu attends." I caressed her soft head and rubbed her floppy golden ears between my fingers. She is a sweet dog, if extremely pushy at times (mostly at snack time).

Comme d'habitude, Braise and I turned our attention to Smokey, who had bounded out of the house as fast as a cowboy surprised by bandits. Shooting from the hip—or all guns blazing—Smokey charged forward, propelled by a noisy gargle of aboiements:

Smokey's head shot in every direction, pulled this way and that by his flapping, toothy muzzle—out of which came the skinny dog's tirade of threats. The scene would be hair-raising if seen by any other perspective than our own.

Braise and I watched, unwilling to point out to our voluntary hero the obvious facts: there was, as usual, not a bandit in sight—not even a lowly field mouse sped by.

Never mind. When Smokey reached the edge of the yellow, parched lawn—fitting of this wild west scene—he began pacing back and forth, coughing out a few more threats in his best impression of gardien. Down below, where the lawn drops off and the grape vines spread out in one great field of spectateurs, Smokey addressed his leafy audience. "I," he barked, "AM Top Dog!"

Braise and I looked at each other knowing very well the truth of the matter: though Smokey is top dog of our hearts, he could not hurt a top fly.

Meantime, he doesn't need to know that...

"You tell 'em, Smokey! You tell 'em!" in the safety of Smokey's noisy wake, Braise and I cheer the underdog.  Handicapped since the tender age of two months old (his hanging tongue but a hint of les ravages he suffered) he has come a long way since that fateful day, when he crossed paths with a couple of lost and angry dogs who mistook him for an easy target....

What the aggressors failed to notice was the Top Mama nearby.

Braise saved her son that day. After being stapled back together and given a "good chance" of making it. Smokey did. Il a survécu.

la grasse matinée
to sleep in

une demi-heure
half an hour

quel dégât
what a mess

il a survécu
he survived 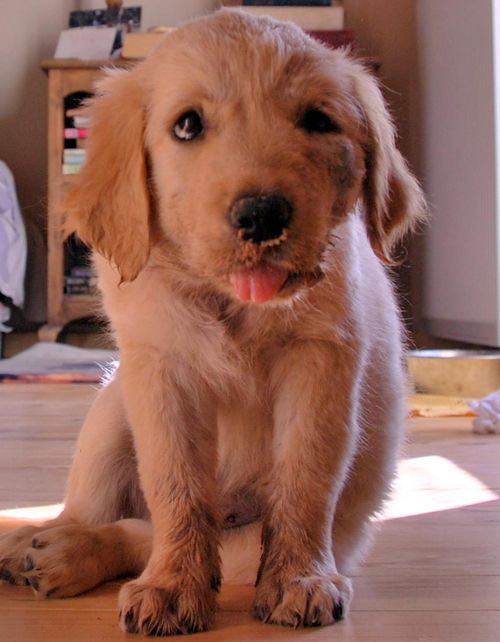 You've come a long way, Baby. Smokey eventually healed on the outside. On the inside he seems to have gained back his confidence, as evidenced by his morning patrol. Since Smokey's frightening attack, Mother and Son regularly practice Self Defense for Dogs.

Braise: Son, mind your ears! You look more like the Flying Nun than Rambo!

Smokey: OK Mom, just trying to look scary. By the way, who is the Flying Nun? 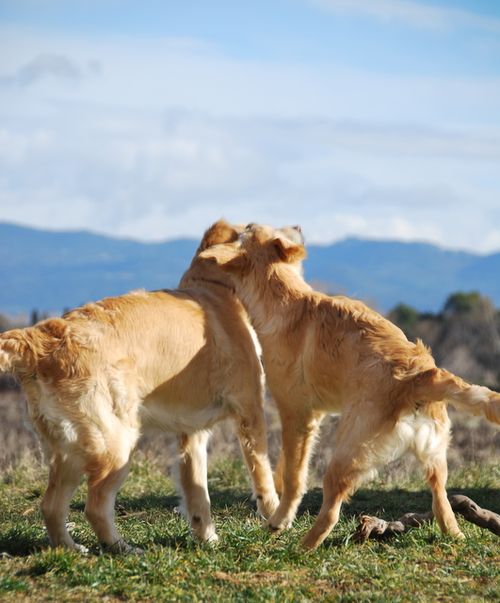 It takes many tender moments to rehabilitate a victim, especially a victimized animal. 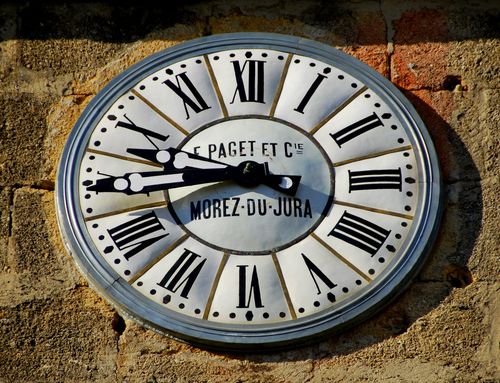 A clock in Cairanne. It is time to put this word journal on automatique—but only for the next three posts. Beginning Wednesday, we will revisit the word-a-day archives—in time for our family to take a mini-break. I am already looking forward to telling you more stories dans un petit semaine.

Le vétérinaire a percé l'abcès.
The veterinarian pierced the abscess.
.

A Day in a French Life...
Kristin Espinasse

Bright and early this Monday morning I found myself barking at an elegant French woman. Talk about out of character... and how we just cannot predict our behavior from one day to the next. Mostly, like a three-ring circus, we surprise and outdo ourselves with each subsequent act, no matter how unrehearsed... There we are, dragged along with the drama of life, kicking and barking -- mouths muttering and ajar.

"ERrrr-uff. ERrrr-uff! Like that," I explained to the veterinarian. Next, I watched expectantly... only the vet just tilted her head.

There she stood, that French woman, in her black high heels and hose with her doctor's frock covering her elegant clothes. Blond locks fell in curls around her shoulders. Her eyes were a sparkle of blue powder and black mascara. Her skin was a-glow with self-control.

After another round or two of barking, I stopped to catch my breath. The veterinarian again tilted her head, this time to the opposite side. 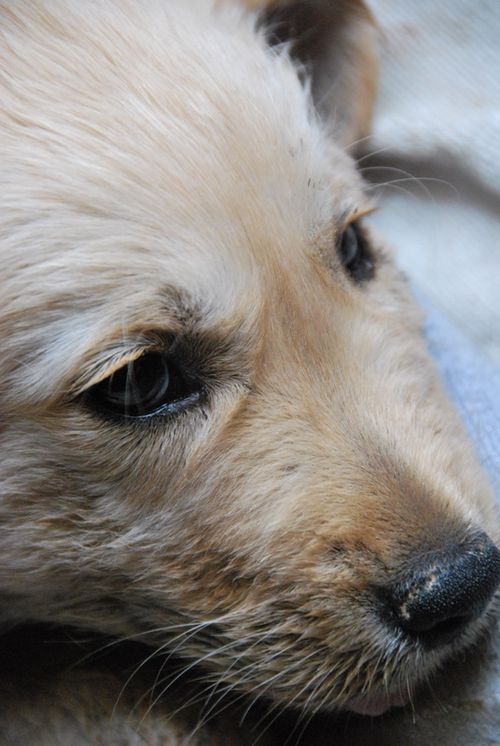 It was then that I realized to what extent our beloved animals transform us. One day we are carefully picking the lint off our shirt—tak tak tak—and the next day we are carelessly covered in puppy fur, having lost track.  We let down appearances... and become real, if only for a splendid instant; thus does our well-kept façade fall off, peel by peel.

There, in an impeccably clean office, I stood barking beside my puppy, who sat sagely on the examining table. "He is so quiet these days", I said, of our chiot.* "Since the attack, he hardly talks at all."

The véto* stood, head tilted, studying me as a doctor does a troubled patient.

"C'est fini, ses soucis," His worries are over, she assured me. As for the golf-ball size abscess (which appeared just last night!) it was nothing to worry about. The vet pierced the lump and I watched, dumbfoundedly, as it disappeared. She then prescribed another round of antibiotics and assured me not to worry another minute about it. Il va bien, notre Smokey!* she said, lovingly.

I was so relieved that I felt like barking my thanks. Instead, I selected a few carefully chosen words from my well-dressed human vocabulary: Merci beaucoup!

On the way out of the vet's office, I patted Smokey's head appreciatively. I'd get my chance to bark blessed thanks to him... once we were safe, in our sound-proof car -- on the road to recovery again.

Update: After the vet removed a half-dozen staples last week, she noted that Smokey's face was broken: his cracked cheekbone and brow bone would eventually heal on their own (this meant his face would be less round, slightly fallen on one side). As for his tongue, which has hung out since we found him passed out, post accident, it may stay that way forever: it turns out his jaw was displaced during the attack. I guess all this just gives "our Smokey" more character. He is awfully sweet to look at, crooked or not.

Thank you for your thoughts. All responses to this story are welcome in the comments box. 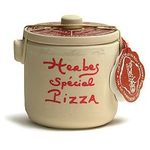 Herbes de Provence (Special for Pizza) in Crock:
Herbes picked in Provence with a blend of oregano, thyme, basil & marjoram