What are "les patins à roulettes"? + Embarrassment is the Thief of Joy 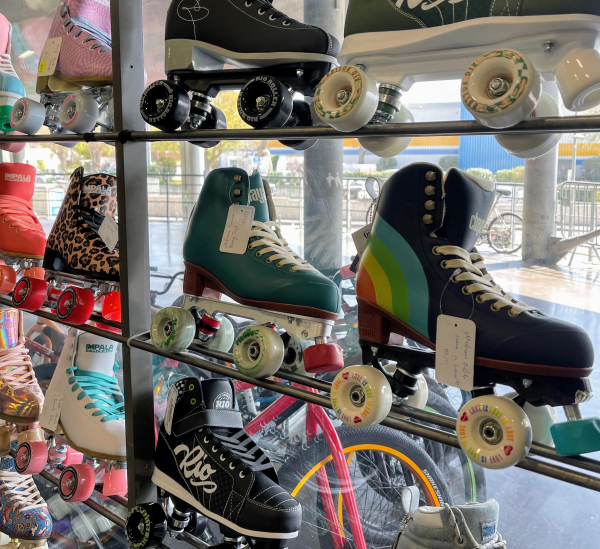 Colorful, vintage "quad" roller skates. Je les adore! How about you? And do you rollerskate? Also, if today's word doesn't interest you, there are a dozen more useful terms to discover in the story below.


FRENCH AUDIO: Click the link below to hear Jean-Marc pronounce the French words in today's post. Then scroll down to the vocabulary section to check your French comprehension.

"Embarrassment is the Thief of Joy"

Vintage roller skates are back, making me nostalgic for the good ol' days when I'd fly out of bed and lace up my patins à roulettes. Off I'd glide round and round our trailer park, freer and happier than I've ever been.

I've wanted to skate for years now, but there never was a suitable place pour patiner (cobblestone paths when we lived in the village, then gravel driveways at our vineyard). Now that we're in a neighborhood paved with smooth chaussées, I admit something else's been keeping me from donning skates: self-consciousness.  I'm too embarrassed to wobble around on wheels in front of my neighbors. 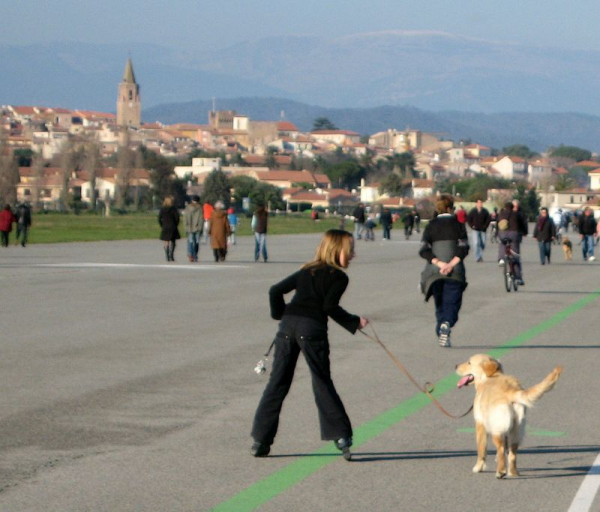 A 9-year-old Jackie rollerblading with Breizh (Smokey's mom) in the seaside town of Fréjus.

All that changed when my daughter drove us to Roller'n Co skate store in Marseilles last week. Chihab, a professional skater with a stylish afro and a cool name (Chihab means étoile filante, or shooting star) assisted us, recommending inline skates with heel brakes for more balance. Turns out those retro quads with toe stops are conducive to backward falls. Houlà! With that, we added protective gear--un casque, wrist, elbow, and knee pads--to our achat.

With so much paraphernalia to tack on, it took a while to get ready our first time out. I remembered Chihab's advice to wear jeans for extra protection, and cautiously descended our front stairs, sur mon derrière....

Jackie and I began on the narrow trottoir in front of our house. Just like riding a bike, skating came right back to us as, knees and posture slightly bent, we glided down the wide boulevards of our voisinage, on our way to La Voie Douce. Having good quality gear and a professional bootfitting by a skate tech made all the difference: these Rollerblades fit like paws! (Did you know the French word for skate--"patin"--comes from the word "patte" or paw?). Even with our new paws, we had a few close calls, mostly while navigating multi-level surfaces (sidewalk endings were the worst!).

Finally, we were on the smooth, wide pedestrian strip known here as La Voie Douce ("The Gentle Path"). This ancient railroad track, now a repaved sentier, runs from the town center all the way out to the train station here in La Ciotat. It's an ideal piste on which to practice le patinage. We joined (and sometimes dodged) walkers, runners, bikers, wheelchairs, and mothers with strollers, along the path, flanked by blooming wildflowers and nice grassy patches to land on, si nécessaire. When it came time to turn back we noticed the downward slope. "Attention, Maman!" my 24-year-old coach called out. Pumping the back brakes of our skates, it was smooth sailing most of the way, until we reached the turn-off for our neighborhood and encountered a road full of potholes (the French call these "hens' nests" or nids-de-poule). Cautiously "walking" down the street we eventually lost our balance and had to hold on to a fence the rest of the way.

Ouf! Back safe in our neighborhood, we encountered one last obstacle: another downward slope or pente. For some reason (fatigue?), I wasn't having the same luck with my freins as before, and began to lose control until I "caught" a telephone pole.  "Mom! Take my hands," Jackie said, skating towards me.

"Mom, let go of that telephone pole and take my hands!"

There was no taking no for an answer. I let go of the pole and grabbed onto Jackie's hands. "Tu vois," my daughter said, smiling as we advanced in an awkward dance, swooping, swerving, laughing, and teetering. As we got closer to home a few of the neighbors looked on and, funnily, it didn't matter anymore. We were too caught up in our joy ride to care.

VIDEOS
Jackie recorded a few short, funny videos of my first time back on rollerskates. Hit the arrow in the center to start the clip. Then hit the arrow on the right to see the other short clips. Can you see the footage, above? If not, visit my Instagram and swipe left to see the 3 videos.

Improve your French via these vocabulary roundups from Spring 2017. You'll discover colorful words and stories you may have missed.

French Roll: Misadventures in Love, Life, and Rollerskating Across the French Riviera. From the icy peaks of Germany to the steamy beaches of France, this coming-of-age story begins when Michael, 19, gets a letter from his girlfriend asking him to meet her in Barcelona. He quits his daredevil job at the top of the German Alps and plots a risky two-month trek across the coast of southern France — alone, on roller skates. He leaves his alpine friends behind to follow his heart with only a backpack, ski poles, and roller skates. Order the book. 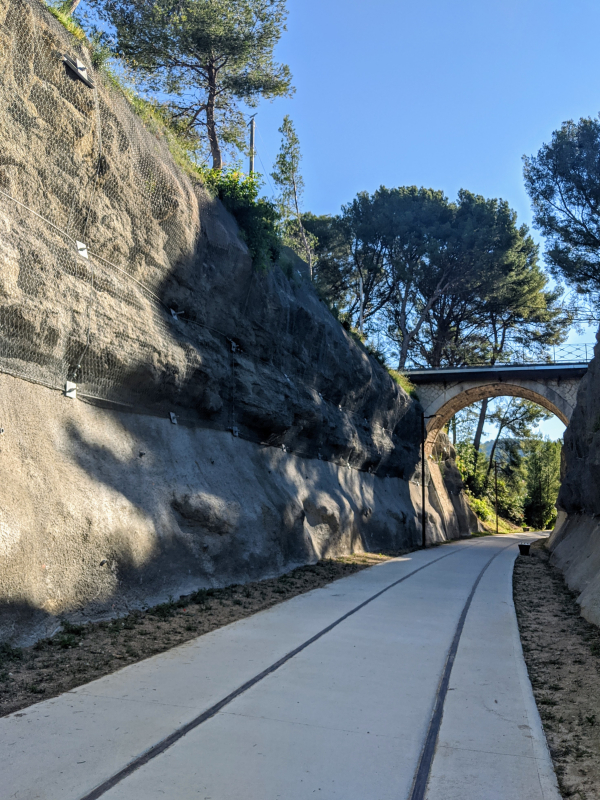 La Voie Douce in La Ciotat. Have time for another story? Learn the French word for "objective", "goal "or "aim"  here. 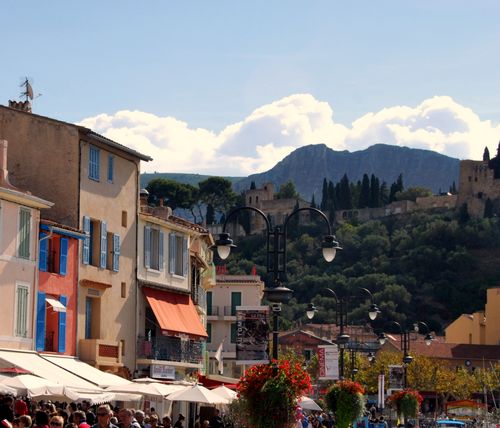 Ever been to the castle in Cassis, South of France? It overlooks the colorful fishing port and gives tourists one more reason to look up.

We often hear about the relationship between beards and nervous impulse; therefore, a lot of soccer players don't shave before an important event, a finale--generally to "keep What does science have to say?

When Jean-Marc returned from his marathon wine hunt (Paris, Champagne and beyond), he looked like a caveman.

"Ça alors! A beard!" I said, opening the front door and welcoming my husband home.

"It's for tomorrow's semi-triathlon," Jean-Marc said, mumbling something about influx nerveux.

I gathered the barbe was one of those trucs or astuces--or things athletes did to put all chance on their side before a challenge. I'd heard of another, called chambre à part, where sportsmen sleep away from their wives the night of a big event. (Ten days apart and we had that one covered, I thought, as I pulled my husband close, planting a kiss on his furry face.)

The barbed truc or astuce seemed to work, for Jean-Marc made it across the finish line, some four hours after diving off the coast of Cassis. After completing two loops from the shore to the bouées, he got on his bike and pedaled to the town of Roquefort-la-Bédoule. All was going smoothly when he left his bike (back at the beach in Cassis) to run to the presqu'île of Port Miou. Along the way, the triathletes encouraged one another. "Bon courage! Allez!" they cheered when passing.

Nearing la ligne d'arrivée, Jean-Marc needed to dispose of one of those energy gel packs. Approaching one of the race volunteers, he flashed a winning smile and pitched the plastic tube to the side of the road. "Veuillez la jeter pour moi?" he kindly asked, not seeing a trash can anywhere.

His troubles began when a race official, standing nearby and seeing the tail end of the exchange, held out a yellow card. Jean-Marc was sanctioned for littering! In the minute that followed a fiery argument erupted, ending when the official told Jean-Marc to run back and pick up the trash.

The fiasco may have shaved a few minutes off my barbed man's timing, but I like to think the irritation served to stimulate more of that influx nerveux--pushing Jean-Marc past the finish line. 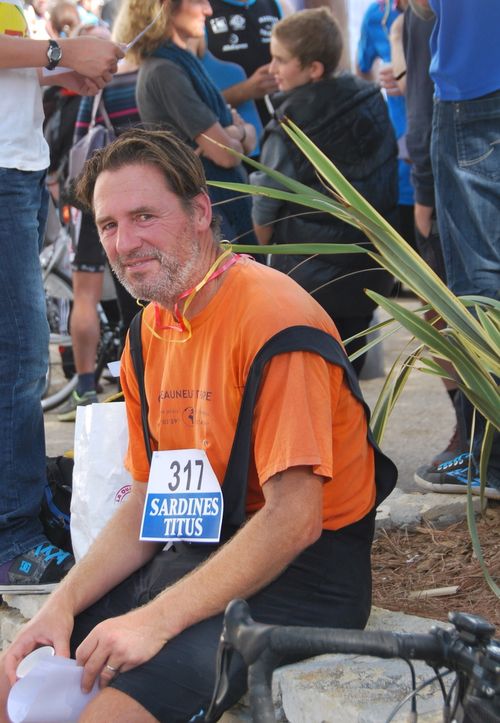 Not a gray hair on his head. As for the beard... Jean-Marc, resting after le défi, or challenge. 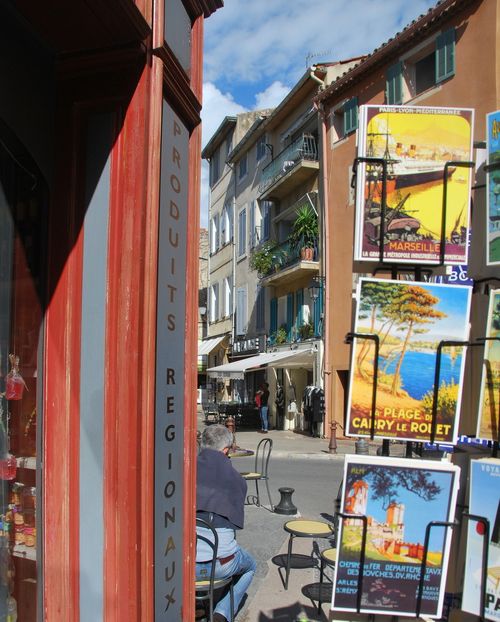 My belle-mère, or mother-in-law, sends me these retro postcards. She's particular when it comes to postcard art, and is known to visit several shops before finding just the right card. 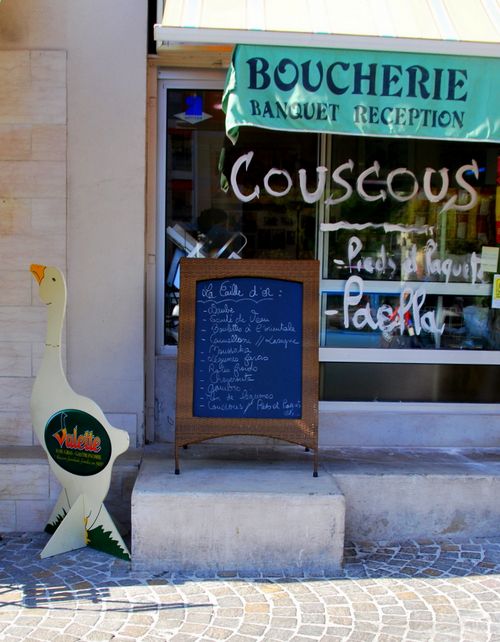 I took these photos while strolling through the town with Jean-Marc's Portland wine importer. Chris had just traveled with Jean-Marc, for the 10-day business trip I wrote about, above. 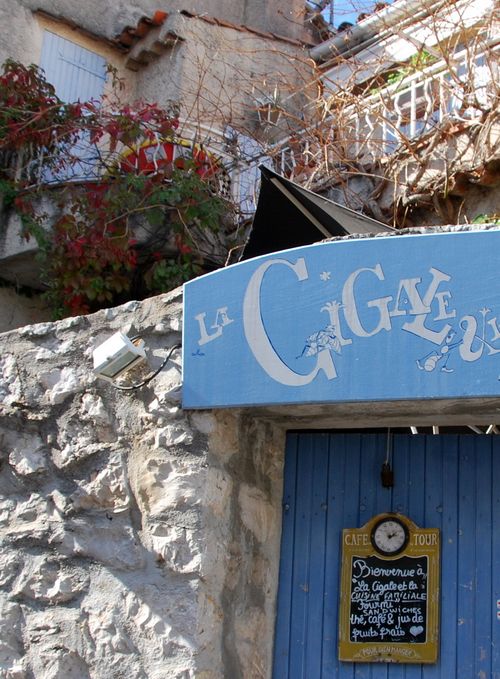 After retro postcards, we have retro shopfronts or vitrines. How do you like this one?