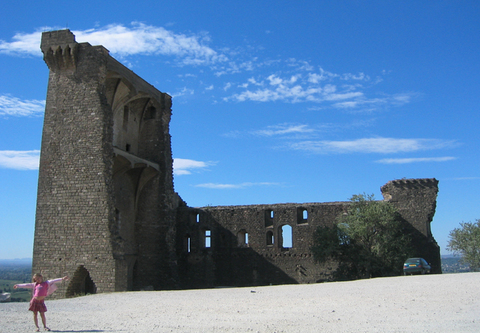 Soignez-vous up high on a hilltop. Photo of my daughter, Jackie, wishing she could fly. Taken at the top of Châteauneuf-du-Pape.

Fleur de Sel (French Sea Salt): Gathered from the salt beds of Camargue by a Master Salter (Maitre Salier), this subtly flavored salt will add burst of flavor to your food. Fleur de Sel is truly an addictive taste!

soigner (swan-yay) verb
to treat, to nurse
to look after, to take care of

Les maladies que l'on cache sont les plus difficiles à soigner.
The illnesses that we hide are the most difficult to treat.
--Chinese proverb
.

Several weeks ago Jean-Marc, Max, Jackie, and I spent winter break in Châteauneuf-du-Pape, just a short drive from Sainte-Cécile-les-Vignes. Our cécilienne farmhouse being in escrow at the time, Aunt Marie-Françoise offered us a room in her holiday gîte*--affectionately known as "la Cigale".* Though it
was too early to hear the trill and drum of the cicada, the cypress trees--which the winged ones set abuzz in summertime--were in full bloom out in the countryside and the powdery pollen sent me sneezing, sniffing, and shuttering up the windows.

While the children and Jean-Marc headed over to uncle Jean-Claude's for dinner one evening, I stayed behind, closing doors, fenêtres,* and painted shutters to block out the allergens which, in turn, were blocking my lungs. As I headed up the creaky wooden stairs to the mezzanine, where a dog-eared book and a box of Kleenex decorated the nightstand beside the guest bed, I was startled by an insistent knocking at the door.

"Qui est là?" Who is there? I barked, in defense.
A soft voice answered, "C'est Marie-Françoise."

The front door was bolted shut in such a way that I found myself locked in the cottage. Not wanting to make Jean-Marc's aunt wait, I hurried over to the window and unlatched the wooden shutters, pushing them open before the twilight.

Aunt Marie-Françoise appeared in a frame of white petals. The almond tree behind her was in bloom and the periwinkle sky beyond seemed to push forth the snow-white flowers. Below, purple irises polka dotted the driveway, announcing that spring had sprung in the land of the papes.*

Jean-Marc's aunt lifted her trusty wicker tote, setting it on the stone windowsill. She is always pulling things "Ta-da!"--or rather Voilà!--from that bottomless basket; from coffee pots to confectioner's sugar there is always some sweet sundry rising to its surface.

This time, Aunt Marie-Françoise produced a dark blue bottle marked "Aroma Force" which, according to the label, promised to "aide l'organisme à se défendre."* I turned the bottle around, noting the ingredients which included peppermint, lavandin,* clove and eucalyptus--essential oils used in aroma therapy.

Suddenly, the bottomless basket hiccupped and out came a piece of cardboard. My savior-soignante* offered her excuses for the haphazard cut-out, which she had quickly designed to help trap the steam in the aroma therapy "nose bath" or "sinus steam" that she was prescribing me. I watched my aunt's impromptu demonstration in which she fit the curved end of the cardboard cut-out to the bridge of her nose and, with a dramatic intake of pretend steam, she relaxed her facial muscles, offering a look of supreme soulagement.* Ahhh!

The last item to pop out of the basket was a jar of tomato soup. "You lose a lot of liquid..." Aunt Marie-Françoise explained, "...when you have allergies: tears, sneezing...be sure to drink a little of this soup," she prescribed.

Before I had the chance to ask how she had found the time to confect the care package (having just finished a full day's work as a speech therapist), Aunt Marie-Françoise was off--but not before offering up an appreciative nod to the flowering almond tree whose delicate white blossoms seemed to soothe her own silent sufferings.

***
Comments, corrections--or stories of your own--always welcome and appreciated! See the Comments box at the end of this post. 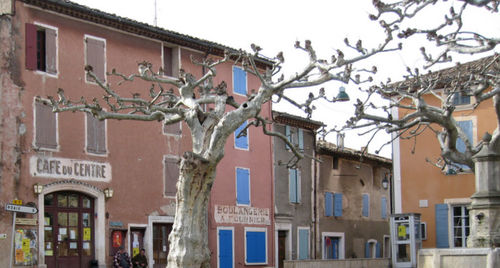 In other French towns... Villedieu. For a cozy halt, stop into the Café du Centre, order a chocolat chaud.