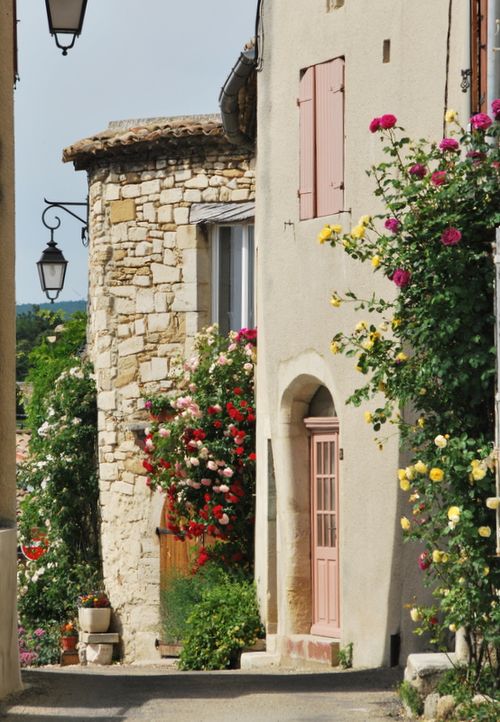 A rose lover's Shangri-la: the village of Grignan. (Just don't steal the flowers... or the sweetness.... read on in today's story column.).

Synonyms: dérober = to purloin chiper = to swipe, filch piquer = to pinch, to nick

(Note: the following story is a re-post. It was written one year ago...)

When your aunt and your uncle are in town for under a week... you've got to be picky and choosy about just which postcard-pretty places you'll take them to see.

Grignan was a must! Its chateau, overlooking the vine-flanked valley, and its perched, rose-petaled village, were once the residence and the stomping grounds of Madame de Sévigné, who wrote prolifically to her fille. Picture so many words showering down from the chateau, falling like tears of joy, watering all those heirloom roses, from "Autumn Sunset" to "Gipsy Boy".

The flowers steal one's attention making it is easy to be attracted to this rose-rampant "rise" in the French sky. Their colorful petals pull your eyes up the narrow paths, or calades, past the boutiques and the art galleries until you are overlooking the patchwork paysage of Provence. After your eyes expand over the valley, they are drawn back in to the skirt of the citadel, which bustles with café life.

There, at the Brasserie Le Sévigné my aunt, my uncle, and I sipped caffeine from colorful tasses à café. Feeling that after-lunch slump, we were content to let our ears do the walking and we listened as they bent here and there capturing the various conversations, most in French, though some were accented in English "city" or "country." I wondered whether the two ladies at the next table were from London? Then again, what do I know about the topography of talk or "accentry"?

Finishing our café crèmes, we stood up to leave.  I called over to my aunt, motioning to the sugar (we were each served two packets with our cup). Having only used one-half of a sugar envelope, I was slipping the leftovers into my purse. I had seen my aunt do the same at the previous café.... "Waste not, want not," she had explained, offering another of her affectionate winks. I figured I could give my aunt the extra sachets de sucre for her train trip to Paris the next day... It is always good to have a little blood-sugar-boosting sucrose on hand when traveling.).

"And take that one too!" I encouraged, pointing to the unused sugar packet in front of her.
Just then, I caught sight of the Englishwomen at the next table. They were watching wide-eyed.

Caught red-handed, en flagrant délit, I had no choice but to finish shoving the second packet into my purse and I cringed when I realized the sugar envelope was open and showering down granulated sweetness, mixing with the contents of my purse.

My dear aunt, her back to the would-be whistle-blowers, was unaware of our unseemly circumstance. "Here," she said, handing me her unused packet of sugar. Meantime my uncle voiced our actions, as my uncle is wont to do: "Oh, what's that? You are taking some sugar? I see."

The problem was others, too, were seeing! And, what with my uncle's commentary, we thieves were a terribly conspicuous crew.

"Put. It. In. Your. Pocket!" I snapped at my fellow sugar-snatcher. But my aunt stood there, her arm extended like a red flag, sugar packet waving like the drapeau of death. It seemed to take hours for that sugar packet to reroute itself into my aunt's pocket and I stood startled-eyed until the evidence disappeared into la poche.

As we turned our backs on the café, my aunt overheard the condemning comment at the next table as one woman spoke in a disapproving tone, pointing out our petty theft to her table-mate. "They've taken the sugar!" she reported.

Half-way to the getaway car and my aunt and I were giggling, "They've taken the sugar!" we laughed, lacing our voices with disapproving English accents. My uncle got into the back of the car, scratching his head in confusion, having missed the episode completely. Meantime, I started the engine and my aunt hopped into the passenger's seat and when we did she winked at me:

With that, we peeled out of the postcard-pretty town, bidding goodbye to a proper Madame de Sévigné and leaving, in the sugar dust, the would-be whistle-blowers with their cups of unsweetened tea.

To leave a comment or a correction, thank you for clicking here.

Do you have a minute to read a short story about my uncle? And about keeping up appearances? Click here. 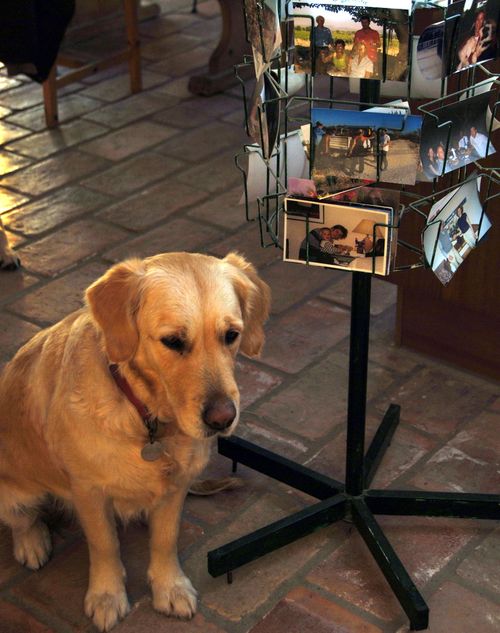 "The Missing Photo". Mama Braise says: "But where is my picture, missing from the bottom of the rack?" Smokey (off in the distance, chewing on something) responds: "...munch, munch, munch...." Braise: "Smokey, is that you I hear?"....

I Heart Paris Shopper: made of recycled material. 1-Percent of the sale of this bag will support the conservation work of the nature conservancy. Order the I Heart Paris bag here.

In film:  Paris Je T'aime Paris I love You. 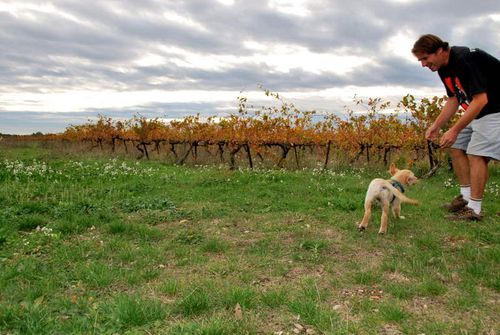 "The Joy They Bring". Smokey, as a young whippersnapper, and Chief Grape.