pourboire: How to say tip in French 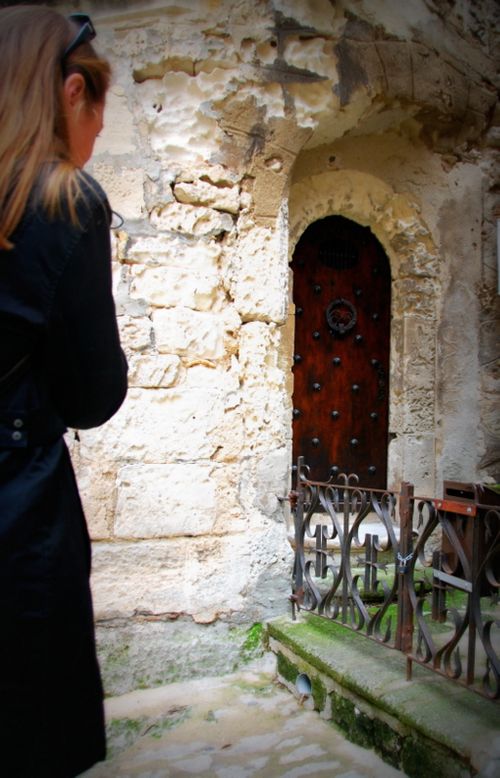 Today, in the US, it's Le Jour de Merci Donnant and I'm busy giving thanks for the people in my life, including YOU and Rouge-Bleu. Read more about my high-school chum in today's story. Note: you haven't heard much about Susan, over the years--that's because I haven't had the chance to see her much. I do have a funny photo, near the end of this post, taken on one of those rare visits, in 2007...

Audio File: Listen to Jean-Marc read the following example sentence in French (note: enjoy the uncut version, in which you'll hear Jean-Marc's reaction to the mile-long example sentence I've selected. Listen closely as he teases, "oh, they're gonna like this one!... Oh, ça va leur plair celui-là! I did leave out my laughter, at the beginning of the recording, and had to beg my husband to please quit the tickling, it's time to get to work!): Download MP3 or Wav file

When the tour bus rolled up to the dock, where our AMA cruise boat waited, I noticed my best friend and travelling companion reach for her porte-monnaie. Quickly, I mimicked Susan's gestures, as I would throughout the voyage, to ensure my behavior was in line with the other tourists', none of whom appeared nervous, awkward, or conspicuous.

Only, as I reached for my own portefeuille, I ran into an embarrassing pépin. Among all the loose change there was only one large coin. The rest were those itty-bitty yellow ones—les pièces jaunes my husband gives the gitans who instantly appear at city stop lights, brandishing water bottles and squeegees.  After they've doused our windshield with sudsy water, one feels obliged to thank them for it. But when my husband hands over the loose change from our cendrier —mostly pennies, twenty French cents worth—I want to hide inside the glove compartment. Manque d'espace!

Back in the tourist bus, staring into my change-purse, I was tormented by visions of a tour guide throwing pennies back at me, just as some of the gitans had done, so offended were they by what was judged une insulte.

As I fingered the change, counting and recounting the coins, my best friend became aware of my fixation. "Everything alright, Rouge-Bleu*?" she inquired.

Completely absorbed by the contents of my change-purse, I was barely aware of answering. "I only have yellow coins for the second tour guide, "I murmured. "I've got a 2-euro coin for the first guide... but I can't find another two-euro coin to offer the second guide."

"But you have enough," Susan assured me, pointing out that all the yellow coins added up to two euros.

"Why not?" Susan was intrigued.

Was it fierté? I didn't want to be the tourist handing over the pennies, never mind the pennies added up to two euros! I'd be seen as one of those oursins-dans-la-poche types. A real cheapskate!

"And besides," I explained, trying to downplay the pride—by highlighting my thoughtful side—"if everyone gave the lady twenty coins (of ten centimes), that tour guide would be painfully weighed down. Just how would she and her heavy poches climb onto the metro for the ride home?"

Susan shook her head and smiled. "Rouge-Bleu, don't be silly. You have enough money—denomination doesn't matter!"

I nodded my head. Susan was right. Still, I couldn't help but stare into my purse willing a two-euro coin to appear. No matter how many times I ran my fingers through the centimes, turning them, I couldn't uncover a might-be-hidden-somewhere 2-euro coin.

Noticing the obsessive behavior, Susan put a stop to it in her usual discreet manner. "Look here, Rouge-Bleu," she said, holding up a prized 2-euro coin of her own.

I unglued my eyes from my change-purse, with it's bottomless pit of pennies, to discover my pal's proposition.

It only took a thoughtful instant to be released from so much torture. Merci ma chère Rouge-Bleu.

Post note, as we walked off the bus and it came time to tip the tour guide, I did so with assurance. I was so relieved to have a big coin to give her, and not a handful of embarrassing pennies. ...Until it occured to me that Susan was about to pay for my freedom!

As she approached the tour guide, I studied my dear friend, as I would throughout the trip, mimicking her every gesture. I still had so much to learn.

How graceful she was as she thanked the guide, pausing to drop those pennies into her palm in one sincere shower of thanks.

*Rouge-Bleu is the name my best friend and I call each other, after coming up with the moniker back in highschool. Susan had an after-school job in cosmetics (Lancome) and we enjoyed trying on all the make-up! When we discovered a lipstick called Rouge-Bleu, we couldn't pronounce the French word without dissolving into laughter. I still have trouble pronouncing it.

You may also recognize the name from our wine labels... Jean-Marc liked it so much he borrowed it! But the original Rouge-Bleu is my dear friend of 30 years. 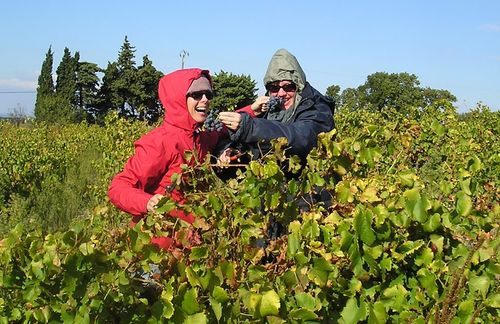 Susan, aka Rouge-Bleu, came to visit after our first harvest, in 2007. Though the harvest was over, Jean-Marc managed to find another field to glean. I'm wearing red--trying to stand out like a beacon lest the hunters (with whom we shared the field) mistake the harvesters, or vendengers, for venison! To comment on any item in this post, click here. 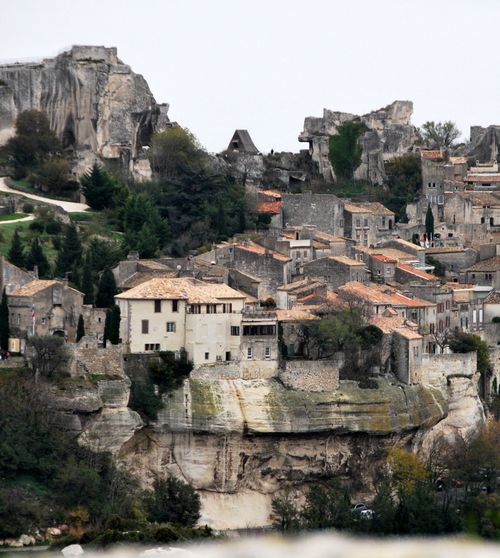 Now to tempt you to come to France... if you need assistance with airline tickets or hotel reservations, please contact Susan. She is the most devoted travel agent. 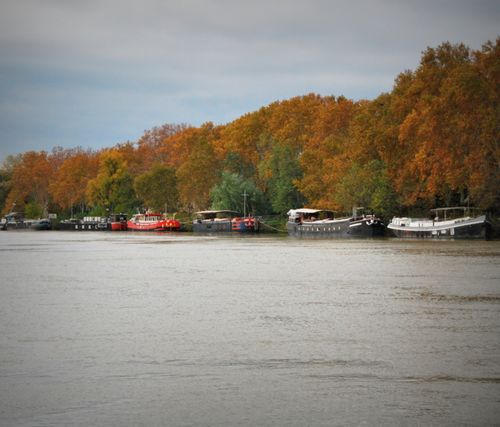 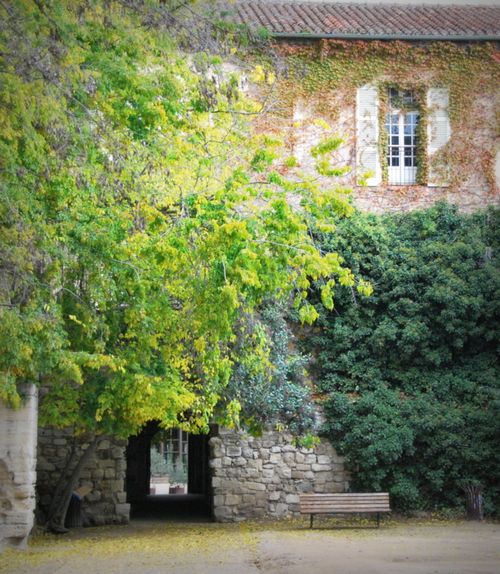 Meantime, keep thinking of your next visit... and you will be here soon! (photo taken in Avignon) 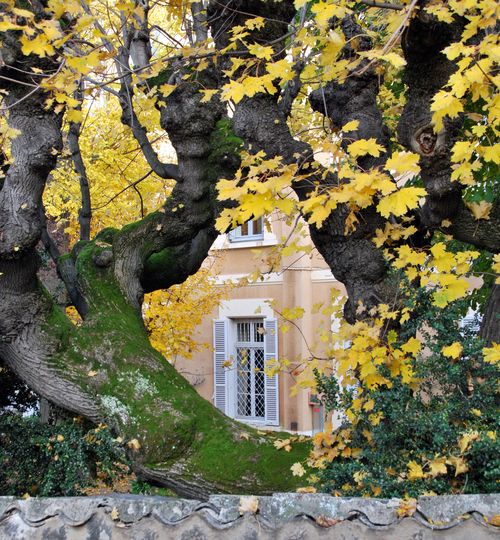 Fall colors in France's 3rd largest city, Lyon, where our croisière fluviale docked on the last day of the AMA Waterways river cruise. If you dream of traveling the French canals, please do me a favor by contacting my best friend, Susan, for details of our Rhône river trip. Her email is Susan@CriticsChoiceVacations.com or call her at 480-831-9076.

Today's word: plein d'entrain
In the category of French words I often hear but have no confidence using, comes the expression "avec entrain" or pleine d'entrain. A French relative used it, just yesterday, on seeing a photo posted near the end of this post. Amarie writes:

Audio File: listen to Amarie's sentence, above, as Jean-Marc reads it: Download MP3 or Wav file

Definition: There are other ways to translate the "plein d'entrain" phrase. According to forum members over at WordReference, and to Reverso.net, here are some more possibilites:

Even though I was on a vacation retreat with a very close and trusted friend, it took a whole day to begin to relax and to leave all soucis behind. Though I no longer needed to think about nagging issues back home, there were new subjects to obsess about, even on a relaxing river cruise. One concern that came up (after who gets the bed closest to the bathroom? (the nervous half of our duo won out))—was tipping.

The French should write a book about pourboires; instead they prefer the subject keep its air of mystery, just like the seductive citoyens. Ask any Frenchman "How much should I tip?" and he'll say what every native says: "In France, tipping is not obligatoire. ...However, if you enjoyed the service you can show your appreciation by leaving whatever amount with which you are comfortable."

Twenty years in France and I am still uncomfortable about tipping. I would not want to slight a bellhop because of my ignorance. And did I know whether to tip the bus driver?—when it seemed the tour guide got all the pourboires? Thankfully, my best friend and traveling partner, Susan, had sent me a brochure of our trip, and I had read the section on gratuities. Apparently tipping would take place at the end of the trip, when in one fell swoop we could thank all cruise employees via the those handy envelopes marked "Tips for cruise manager" and "Tips for ship crew". A low-down on how much per day, per entity, was clearly given (for example, 3 Euros per passenger, per day for the Cruise Manager and 12 Euros per passenger, per day for the crew).

As to how much, exactly, to leave the on-shore tour guides, there was a helpful section about how to show appreciation for them, too; it even included a handy tip range (between 1 and 2 euros per guide). That seemed reasonable to me, and it was easy to decide on leaving 2 euros—instead of only 1—at the end of our guided tour of Les Baux de Provence. I even had the necessary change. So why start to sweat and obsess when it came time to hand over the money?

Thank you for reading. To comment on this post, or to read the comments, click here. I would love to read your notes about travel, including issues such as tipping, taking the tour bus, pit-stops, staying in new and unusual places, and any anecdotes you have to share. 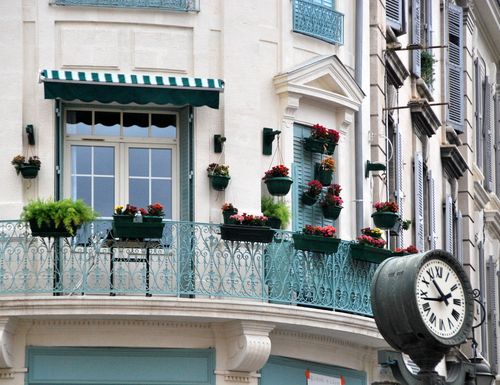 Almost time to tip... in Avignon. Get those 2-euro coins ready for the tour guide! Please share your tipping anecdotes here, in the comments box. I'd love to know how you handled tipping while on a guided tour. What about the bus driver? Did you tip him too? On our trip it seems the tour guide got all the pourboires. "Etienne", a boat with character, parked near our cruise ship. 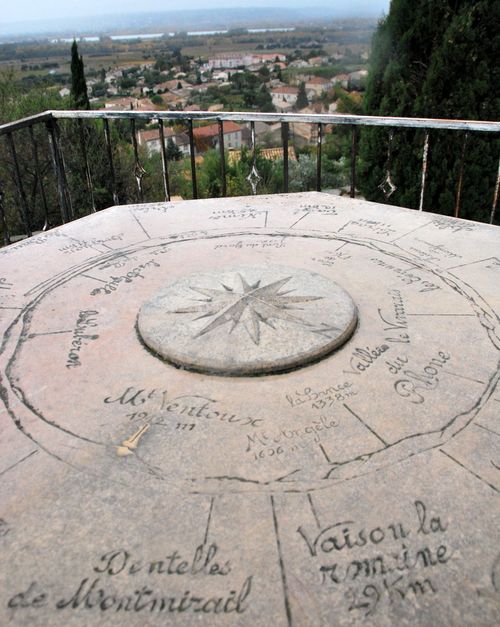 Our group traveled past Chateauneuf du Pape, and I felt a sharp tug to my heart while gliding past the life we left behind, after our move two months ago. Incredibly, the tour bus passed by Uncle Jean-Claude's wine cellar! I actually saw my aunt and uncle perched on the curb, smiling up at our bus.

I stood up and began to wave excitedly from the other side of the bus's tinted windows... but my aunt and uncle did not see me, in spite of their searching eyes. If you are reading, cousin Audrey, I think I saw you too... in one great emotional blur. XOXO.