Look closely and you will see the man in the reflection. I'm looking closely too.

: in spite of circumstances

A Day in a French Life... by Kristin Espinasse
.
La Vie en Prose

Looking back one day
I will
appreciate

that
malgré les circonstances
I wrote

It shook outside
I shook inside
and yet 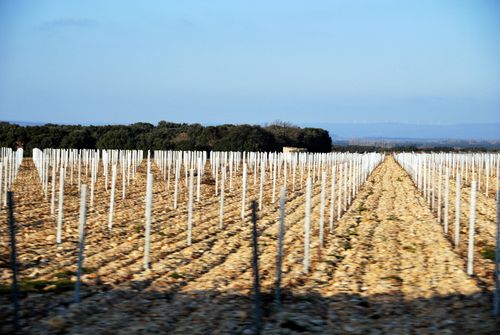 Stakes in the heart (of Provence). In other hearts... take a minute to read Newforest's poem in French, in response to the "respirer" story. Click here to view it.

The stairs and all those tubes I told you about, when we moved to the farm and began home improvements.

While packing up the house last month, I came across a travel journal from 1989. Inside the spiral notebook with the oh-so-French quadrillé* pages, I had collected impressions from a two-week voyage through Spain and Portugal.

Betsy was my unlikely travel companion. The only thing we had in common was the study-abroad program we'd just completed in Lille, France; that, and the fact that we were both staying on in the Hexagone while the other students in our group returned to Tempe, Arizona.

There was a three or four weeks' break before school would resume in Aix-en-Provence, the southern French town where we had both registered for classes. Betsy had thoughtfully filled in the gap between semesters: she would tour Europe via an economy rail pass. I could join her, she mentioned, if I had nothing better to do. Less adventurous, I hadn't planned beyond getting myself from Lille to Aix. The idea of being with someone else during the three-week interval came as a great relief.

Our luggage said all you needed to know about our differences. Betsy wore one of those heavy travel packs on her back, the kind with buckles and straps and outer mesh pockets which could hold anything from a water bottle to one of those roll-up mats for sleeping "in a pinch".

As for me, I had an extra large suitcase, which held the little black dress that I might wear in another kind of "pinch" (of the wardrobe kind). In addition, the suitcase contained all the "musts" (make-up, hairdryer, heels...) that rendered the bag heavier than a sack of eight-balls. The suitcase was trimmed in royal blue and had a faux leather insignia that read "Ricardo of Beverly Hills". I had gotten it on sale at Dillard's department store, where I worked as a lingerie clerk.

There is a passage in the diary where I am struggling with my overpacked suitcase in Barcelona. It's getting late, we need to find a youth hostel, and we are rushing to catch the metro--only I am stalled at the top of the escaliers,* fretting about how to get down the stairs with my heavy bag. Betsy is urging me on from the last step below. Finally, she heads up the stairs--two at a time--backpack on her back, collects my suitcase and whisks it to the lower level.

*   *   *
At this point in my nostalgic pause I pitch the old journal into a packing box. Quelle gringalette!* How could Betsy have put up with me? Thank God I've changed! ...Or have I?

It is tempting to say that Jean-Marc picked up my bag where Betsy had gently set it back down. For I would meet him soon after, just as I was set to return to the States. Later in the journal, I write about the need to leave France, three months earlier than planned, owing to a troubling event. On one of the last pages in the diary, there is a revealing letter which I had transcribed. The note, written by Jean-Marc and dated 26 Février 1990, reads:

Kristin,
Avant de nous quitter, il faut que tu saches que la Provence et moi, nous voulons t'aider. Si tu as besoin de nous, nous serons toujours là pour t'entourer de tout notre amour. (Before leaving us, you must know that Provence and I, we want to help you. If you need us, we will always be there to surround you with all of our love.)

Flash forward now to July 4th (the day we were married, 13 years ago, at the "Bagatelle" town hall in Marseilles). Looking out the second-floor window, I see a field of vines. In the forefront of this image, there is Jean-Marc, who is negotiating with the plumber, the electrician, the woodworker. On his back he wears the weight of so many pressing decisions that need to be made as "we" undertake to rebuild the wings of this 400-year-old farmhouse. I need to be participating in the decision making, instructing the plumber on where to place the "standard-priced toilet". Instead, I wonder why the toilet is standard, as are all of the items on the devis.* The bathroom sink is so standard that it includes only a cold-water knob. "Can't we have something a little "warmer"?" I ask.
"Perhaps!" Jean-Marc reminds me, "If YOU'LL go out and find and price the items!" Fair enough.

"And the iron handrail along the stairs--why is there only one?" I want to know, having arrived on the scene several months after the work began, back in March. Jean-Marc, who has been overseeing the renovation, replies, "Because there will be a wall on the opposite side."
"But will the wall...(here, I pause to think about the plasterboard wall, wishing it were really stone)...will it run the entire length of the stairs?"
"No," Jean-Marc answers. "Listen," he says, exasperated, "if you want another rail then you'll have to talk to the ironworker and order one. I personally don't think we need one." Just as we don't need hot water in the W-C!,* I think, keeping my thoughts to myself.

The electrician wants to know how many electric sockets we want in the kitchen, living room and hall. I don't know...and what does "va-et-vient"* mean anyway?

I know I shouldn't keep calling on him. That "suitcase" of mine that he offered to carry is getting heavy. I notice he isn't whistling anymore. 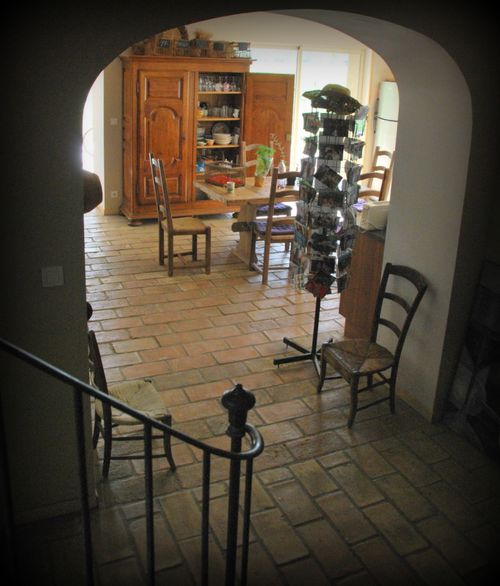 Our kitchen (view from the opposite side), after renovation. 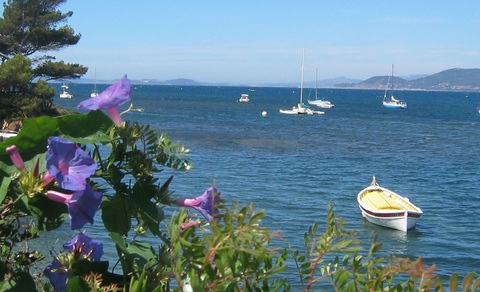 When your frigo* begins talking it's time for you to take a break. And so it is that this thrice-weekly letter will go on leave. The words will resume in under a fortnight (and after a fort* dose of R&R).

Entre temps,* and just to reassure you (and me) that I am not really "hearing things," I will partager* the nugget of "frigian" philosophy that our ice-box shared with me the other day when it offered up the following maxim:

Boom. The French words hit me like hailstones (or sharp-edged magnets, according to the way the words revealed themselves: black on white, along a sticky, linear line, and over a metallic surface.)

I approached the fridge and stared at the door full of French word magnets, four of which had seemingly gathered themselves together, like foam above a windswept sea.

"Harrumph! Well THIS explains things!" thought I, remembering a certain stubborn someone in my immediate entourage. No use trying to talk sense into him--he can't even hear me. My words "fall" right off of him--he is blind to the truth!

My eyes remained glued to the magnetic maxim. How can one with blinders on "see the light" or "hear reason" or "be reasoned with" if you like (...or rather, if "I" like? For it IS all about me after all isn't it?).

This last inspiration is slow in coming, as is the tray of water destined to become one dozen ice cubes if you leave it be. (And if your husband hasn't returned an empty tray to the ice-box, as he does. But never mind that, it isn't about the ice cubes. It never is.)

Back to that last inspiration based on the pop psychology mantra: "It Isn't All About You!" OK, so it's not about me. It can be more about us and all of the things we have in common: l'espoir, la peur, la colère, l'orgueil; la tristesse, besoin. Le besoin d'amour.* And blindness. And deaf ears.

I look back at my freezer door behind which I was about to return a half-empty pint of Numb-Thyself-Noisette.* I run my fingers across the word magnets until the smooth surface and sage words bring my senses back to the here and now. No longer blinded by my emotions, I hear the music once again.

in Trial and Error | Permalink